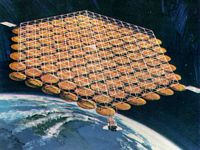 For me, the “killer app” of Space Elevator Development has always been the economically viable deployment of Solar Power Satellites.  It promises unlimited, clean energy from the sun, captured by SPS and beamed to earth-based rectennas and from there, channeled into the earth’s power grids.  The problem has always been, as I understood it, getting these SPS into orbit cheaply enough so they could be economically viable, and this is still true.

But there’s a BIG difference between making SPS a commercially viable enterprise and making SPS able to generate the lion’s share of earth’s energy usage.  In my naiveté, I had hoped they would be one in the same, that we could replace most or all of our polluting energy sources with SPS.  Sadly, unless my calculations are way wrong, this turns out to be not the case.

Here’s the basic numbers (I’ll explain where I got them later on in the posting):

I hope my numbers are wrong because they mean that, unless SPS efficiency can be increased by at least an order of magnitude (or two), a SE-SPS solution may be commercially viable, but will not seriously decrease the release of CO2 and other pollutants into our atmosphere.

Where did I get my numbers?

I got the SPS performance number from a presentation by Keith Henson.  This presentation (PowerPoint format here, pdf format here) is quite interesting.  He presents the 2kg/kW number as an aside; his proposal is for a “direct drive” Space Elevator (as opposed to the Edwards-Westling “laser-drive” version).  I went to a couple of other sources to try and verify his number.  Wikipedia gives a range of .5kg – 10kg per kW.  A White paper by the International Union of Radio Science (URSI) gives a number of 1kg/kW for their proposal.  So 2kg/kW seemed reasonable to me.  Incidentally, I had blogged about his “direct-drive” proposal earlier, here.

The 140T / 125 trips per year number comes directly from the Edwards-Westling book, The Space Elevator.

The projected, yearly, planet-wide energy increase comes from the US Governments Energy Information Administration website.  This website contains all sort of fascinating information and I had a lot of fun poking around in it.

This information, in part, led me to the conclusion that only the profit-motive is strong enough to drive the development of the Space Elevator, not the ability to solve our global energy and/or pollution problems.  I presented this at the recently completed SESI conference and blogged about it here.

One final note; Keith Henson was recently interviewed by RUSirius.  You can find the podcast here.  It’s a long podcast; they actually begin talking about at 10:03 into it.  I strongly recommend you review Keith’s proposal before you listen to this rather rambling podcast – otherwise it may not make much sense to you.

(The picture is from www.abo.fi – click on it for a larger version)

20 thoughts on “The Space Elevator and Solar Power Satellites (SPS)”