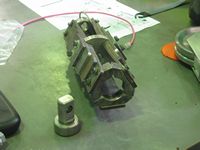 One of the tests run today was a test of the helicopter / cable / winch system.  Everything between the winch and the helicopter is referred to as the ‘cable assembly’.  This includes not only the steel cable which the climbers will ascend and descend, it also includes things such as hooks, shackles, load cells, etc.  If any of these components fail and causes a breakage or separation of the assembly, it is referred to as a ‘cable separation event’.

During the testing today of the helicopter / cable / winch system, a “cable separation” event occurred.  One of the components in the cable assembly is a frangible link and it was included to protect the helicopter in case a specified load on the cable assembly was exceeded.  That link separated today during testing.  Either the link failed to hold to the required load or else the load exceeded the link’s rating.  There might be a third possibility, but I can’t think of what it might be offhand.

The picture thumbnail shows the link.  This link is in the assembly with other components above and below it.  The plug, shown in front of and to the left of the link, pulled out of the link – it should only do this when its rating is exceeded.  As I wrote earlier, either the load did exceed the rating or else the link failed and separated prematurely.

Obviously, there will be testing and analysis to done to determine why this all happened, just as happened after the pulley failure in the previous test round.  Stay tuned to this blog or the official website of the Space Elevator Games to keep up-to-date.

Incidentally the redesigned pulley performed flawlessly and this looks like a solved problem.

One other thing which should be noted is that a ‘cable separation event’ was one of many contingencies which had been previously thought of and a procedure designed for.  The NASA person in charge of this operation immediately called this procedure into effect and executed it.  Procedures are useful only when they are followed and this one was followed promptly and correctly.

Laser testing continues to go well and will conclude tomorrow (Friday).  The TRUMPF laser continues to perform nominally and the remaining teams are taking full advantage of it.

2 thoughts on “What’s frangible about a frangible link?”