Continuing from the last post, here are a few more odds ‘n ends relating to the Space Elevator which have occurred lately…

And what is this, you might ask?  It’s how you write “Space Elevator” in Armenian.  At the July Space Elevator conference in Redmond, I had the pleasure to meet Karen Ghazaryan.  He gave a talk on Sunday entitled; “Stability of Superconducting Cable Used for Transportation of Electrical Current from Space“.  In the lunch period afterwards, I chatted with him and took the opportunity to ask him to add Armenian to my Translation Project.  He graciously consented and now we have it.  Oh, by the way, the pronunciation is “Tiyezerakan Verelak”.  Thank you Karen! 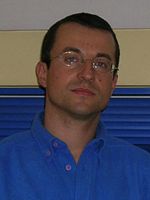 The Space Elevator skeptics are having their say…  Recently I linked to an article on Discovery Space from Spaceward‘s Ben Shelef, discussing benefits that a Space Elevator will bring.  Discovery Tech has now posted an ‘opposing viewpoint’ from Italian professor Nicola M. Pugno.  His objection is that inherent defects in carbon nanotubes will prevent it from ever being strong enough to create a Space Elevator tether (he’s weighed in on this before).  But he’s not an opponent of the idea as he says that his team has come up with a plan to build a ‘flaw-tolerant’ tether.  Professor Pugno is my kind of skeptic – find an objection and then find a way to overcome it.

Here is a posting from another skeptic, tech-archive.net (‘Space Elevator’ idea almost as stupid as the ISS), in which the author gives no reasons it won’t work – just quotes one of the of the articles which came out of “Japan is building a Space Elevator craze” and says that we need to restart Project Orion if we really want to get to space.  And in the same vein, here’s a skeptic who argued that a Laser powered climber isn’t practical, only to then have a REAL laser expert (Dr. Jordin Kare – a member of the Lasermotive team, among other distinctions) disagree.  Dr. Kare’s money quote: “There are certainly reasons to be skeptical about space elevators, but the laser power transmission system really isn’t one.”  Read the whole exchange and make up your own mind.  I don’t mind skeptics, I just mind those who haven’t bothered to do their homework.

Speaking of Dr. Kare, he was recently a speaker at the Space Solar Power conference in Florida.  Some of his remarks were captured (by blogger Transterrestial Musings) along with other, relevant, power-beaming comments.

And for our final “skeptic” note, here’s someone who is not a skeptic that Space Elevator can be built, but is afraid that it won’t be we Americans who do it.  I hope he’s wrong – he might not be. 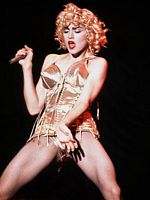 I’ve already talked about the swell of publicity that surrounded the Online Times story about the Japanese “building a space elevator’, but one more article, this one from the Russian media, is worth noting.  The author, Yuri Zaitsev, talks about the Space Elevator, in general, (and notes that it’s a Russian invention) and he also talks about tether experiments in space – which I found interesting.  I love to hear what the Russians have to say about the Space Elevator.  In some ways, their space program equals or exceeds ours.  They have everything they need to build a Space Elevator (except the tether, of course, which we’re all waiting on).  I’ve previously posted about the ‘Russian perspective’ (here, here and here) which is very valuable, of course, but who can forget the travesty that they visited on Madonna… 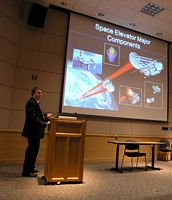 And, moving from Madonna to Dr. Bryan Laubscher, Bryan recently gave a talk at the Bellevue Community College about the promise and challenges of building a Space Elevator.  Let’s hope that he has inspired at least one or two people to join this effort.

Finally, here’s an article from the Saskatoon StarPhoenix.com asking the public which of five proposals would they support for a ‘destination center’ (a Canadian euphemism, I think, for ‘tourist stop’).  One of the possibilities is; “Innovation showcase: U of S is interested in partnering with the museum and creativity centre in one connected space. The university is looking at showcasing the innovative projects students create, such as components for the space elevator, for example.”  ‘U of S’ is, I’m sure, the University of Saskatchewan and THAT means the USST team.

And that nearly catches us up.  My next post will have some cool new space-elevator graphics that I’ve found – along with a few other bits and pieces that have showed up in my search engines…