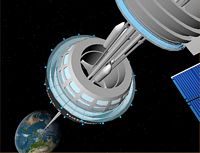 As promised in my last post, I’ve found some new Space Elevator graphics that I’ll share with you.  I found this first set via the website io9, a ‘different’ site I’ve posted about before.  The title of the post was “Imagining the Chuck Klosterman Space Elevator“.  Chuck is a writer for Esquire magazine and he published a future history of the 21st century.  In this history, he predicts;

“JUNE 22, 2043: As predicted by Arthur C. Clarke in 3001: The Final Odyssey, the orbiting luxury hotel is connected to Earth by a massive space elevator. Hyperstrong cables anchored to the earth near the equator (as required by physics) stretch 100,000 kilometers into the sky, rising into the hotel’s lobby.” 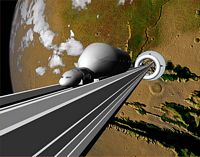 Of course he also predicted that McCain would win the election next week and, among other things, that on “MAY 8, 2030: A deathbed confession by George W. Bush reveals that JFK was, in fact, assassinated by the CIA.” and on “OCT. 19, 2071: An army of panda bears attacks Beijing, killing twelve hundred people and wounding thousands more during a bloody four-day onslaught.”  The CIA assassinated JFK?  Maybe, but I’m not buying the Panda Bear thing… 🙂

Anyway, back to the graphics I promised.  These first two graphics in this post were shown with that ‘Chuck Klosterman…’ story and credited to artist Bruce Irving.  They came from Flickr, posted by “Flying Singer”.  The first is the earth-based Elevator rising to a Space Hotel while the second is an Elevator on Mars.  If you visit the Flickr site, you’ll see that the earth-based Elevator graphic is an ‘active’ one with various call-outs as you mouse around the picture.  A visit to Flying Singer’s Flickr site is highly recommended – lots of cool photos and graphics to peruse… 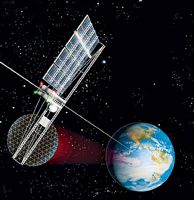 This next graphic comes from Arie Wijaya’s website.  On this site, he discusses the Online Times article (he’s the 5,259,027 blogger who has picked this up 🙂 ).  He doesn’t give credit for the graphic, so I don’t know where it came from – might even be from the LiftPort archives. 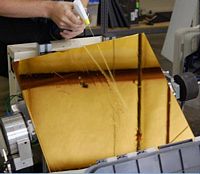 And that, truly, catches us up with all of the backlog in my Search Engines.

(As always, click on the picture thumbnails for a larger version)