We have a large Japanese presence at the conference this year, and they have made a tremendous contribution to the proceedings.  In addition, to making several presentations (and some very exciting announcements), they have brought an exhibit, a DVD we all watched during the “Mixer” hour this evening and probably a few other things I’m forgetting to mention.  They even brought some gifts for yours truly, some Pocky for my kids and a copy of the Edwards-Westing book translated into Japanese (a book I blogged about earlier).  I’ll cover the individual Japanese presentations later, but wanted to put up some pictures and notes about them now.

The Japan Space Elevator Association (JSEA) was created last year.  According to Akira Tsuchida, one of the directors of JSEA (and the team leader of the Earth-Track-Controllers (E-T-C), an entrant in last year’s (and hopefully) this year’s Space Elevator Games), JSEA now has over 40 members and is growing.  It has been created to promote the idea of developing a Space Elevator and to educate the Japanese public about the advantages it can bring.  In many ways, the Japanese public is much more educated about and receptive to the idea of a Space Elevator than we Americans are.  It has been part of their literature / fiction for many years. 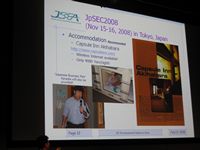 The first JSEA Conference is scheduled for November 15-16 this year (an event I will make every effort to attend).  We’ve been invited to stay at the “Tube Hotel” and to take a guided tour of Akihabara (the electronic bazaar in Tokyo, a place I’ve already visited) as part of the conference.  We might even get the chance to hear Akira demonstrate his Karaoke skills 🙂 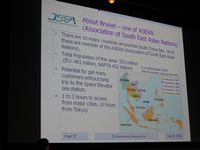 JSEA also plans on creating the first annual JSEA Space Elevator games in 2009 and is working on hosting an International Space Elevator Conference in the Sultanate of Brunei, also in 2009. 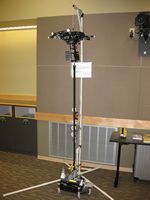 Here are a couple of pictures of a Space Elevator and climber and station, built entirely out of Legos.  My own house is full of Legos – before my son grew out of them, he put together Lego kits of various Harry Potter characters and locales, Star Wars characters 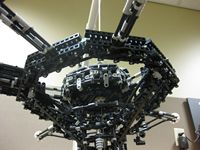 (including a big Yoda) and who knows what else.  But this Space Elevator representation is something special… 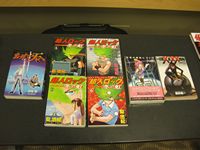 Yes, the Japanese contingent has made its presence felt.  How much this will contribute to the building of a real Space Elevator only time will tell.  But they seem sincere and dedicated (and even have come up with some (Japanese) government funding, so they must be taken seriously.  I, for one, am glad to have them on board, and I’m sure that everyone else here at the conference feels the same way…