At the 2008 Space Elevator Conference, a large contingent from the then newly-formed Japan Space Elevator Association (JSEA) showed up.  They blew us away with how much they had accomplished in so little time and wowed us with videos, TV-show recordings and Anime from Japan – all showing how well-accepted the idea of a Space Elevator (aka the “Space Train”) is in Japan. 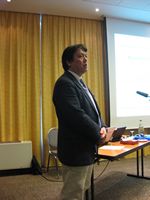 At this year’s EuroSpaceward conference, the Japanese are again here in force and are, again, wowing all of us with how successful they have been.  This past year, they have run two Space Elevator competitions (JSETEC and LASER ’09) and next week will be hosting their second conference (in Japanese only – no translators this year).  Shuichi Ohno, the President of JSEA gave a presentation about what JSEA has been doing this year and brought with him a sample climber made out of LEGO’s.  You can actually buy a Space Elevator LEGO kit in Japan now from JSEA – now THAT’s organized).  I’ll have to see if we can do this in the US too – I can’t think of a better way to get children interested in the concept of a Space Elevator (except, perhaps, to have a Family Guy or South Park episode based on a Space Elevator – actually, that’s not a bad idea…). 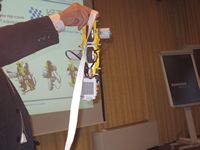 They have also published a Space Elevator introductory pamphlet and Shuichi showed a video made summarizing JSEA and it’s activities and it was marvelously well done.  I’m working on getting permission to upload it to YouTube and then I can share it with all of you.

The first picture is of Shuichi while the second is of the LEGO Climber.

I’m very glad the Japanese are here, but they sure set the bar high…