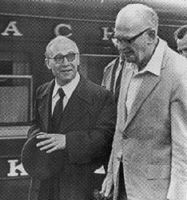 Today I received the following email from Thilna Heenatigala, the General Secretary of the Sri Lankan Astronomical Association:

Sixty two years ago Arthur C. Clarke of the British Interplanetary Society sent a letter to the editor titled Peacetime Uses for V2 which was published in the 1945 February issue of the Wireless World magazine suggesting the use of Geostationary Satellites for the instant global communications. Quoting,“I would like to close by mentioning a possibility of the more remote future–perhaps half a century ahead.  An “artificial satellite” at the correct distance from the earth would make one revolution every 24 hours; i.e., it would remain stationary above the same spot and would be within optical range of nearly half the earth’s surface. Three repeater stations, 120 degrees apart in the correct orbit, could give television and microwave coverage to the entire planet.”

Today, the Clarke Orbit has over 330 satellites. Sir Arthur C. Clarke, a science-fiction author, inventor, and futurist, simply a greate mind celebrates his 90th birth anniversary on 16th of December, 2007.

In 1959, he founded the Ceylon Astronomical Association (now known as Sri Lanka Astronomical Association). As the current General Secretary of the Association, I’m honored to run an association founded by him. And as a big fan of his writings and admirer of his work, I have put up a blog where every one could wish him for his 90th birth day.If you are a friend, colleague, fan or simply an earthling who admires work of Sir Arthur Clarke, please write your greetings and good wishes on the blog. Please forward this message around and publish in your website/ magazine/ paper/blog etc… if possible.Let us wish together a healthy and a long life for Sir Arthur.Post your greetings and wishes on http://SirArthurCClarke90.blogspot.com

Readers of this blog know that I am a huge fan of Sir Arthur C. Clarke.  I think I can honestly say I’ve read everything he’s ever written for public consumption, both fiction and non-fiction.  His book The Fountains of Paradise was what introduced me to the concept of a Space Elevator and is probably the main reason this blog exists.  One of my fantasies is that someday he would attend some Space Elevator Function (the Games, a Workshop / Seminar, etc.) and that I would be attending it too and would have a chance to meet him.

Please visit Thilna’s birthday blog and post a birthday greeting to Sir Clarke.  Without him, the World would be a much poorer place.

(The picture thumbnail shown is of Sir Clarke with Yuri Artsutanov, the father of the Space Elevator concept.  I don’t know who to give credit to this photo to, but I found it here.  Click on it for a larger version.)