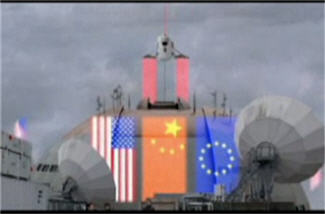 Well, I wasn’t quite sure what to expect with this show, but I thought it would be something along the lines of the Science Channel show – a “Space Elevator primer” as it were.

Having said that, I’m glad this was different; there was enough there about the Space Elevator to introduce the concept to the uninitiated, but not so much as to “bore the choir…”

The idea of a lab located on the Space Elevator, 250 miles above the earth, is certainly doable (once you have a Space Elevator, of course) and, one can see that it would be a great place to actually test out Solar arrays (IMHO, the “killer ap”, near-term, for a Space Elevator).  And, a joint lab between the Americans and the Chinese is not out of the question.

Seriously, I thought the show was fun, but they missed an important point.  They talked about how a Space Elevator-based solar lab would be able to develop / test new solar power technology, but said not a word about how, once the solar arrays were built, they would be placed in orbit.  You need a Space Elevator to do that, rockets would just not be practical.

On the optimistic side, the show did posit that a Space Elevator would be in place by 2057.  I’m hoping for a lot sooner than that.   The most interesting comment in the entire show (IMHO) was the spoken assumption that the United States and China would be the two preeminent powers in 2057.  I wouldn’t count out either the Russians or the Indians.  Russia is a country tremendously rich in natural resources and has a long history of technological prowess.  If they can ever get their act together, they will be a formidable competitor.  I’d also be leery of betting against India – there’s something about this country that inspires respect.  They’re not as rich in natural resources as Russia is, but will soon be the world’s most populous nation.  If you believe (like I do) that educated people are an asset, then you have to say that their future is bright.

This show will re-air on Saturday, February 3rd at 04:00pm eastern/pacific (note that the time may be am – I think they made a mistake on their website).  In any event, please, as they say, check your local listings.