And now for something completely different…

At last year’s EuroSpaceward Conference, Aage-Raymond Riise, ESA-ESOC (Germany) brought a demonstration of a”Longitudinal wave climber”, demonstrating how a climber could be made to go up and down a tether purely through the use of vibrating it at the proper frequency (I had blogged about it here).  At the 2008 Conference, Aage used a belt sander to vibrate the wooden tether to produce the necessary frequency. 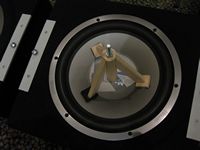 He was back at this year’s conference with a new, improved model and I’ve included some photos (and another YouTube video) of the climb.

Rather than use a belt sander to induce the longitudinal waves in the tether (as he did last year), Aage this year used modified speakers.  This first picture shows one of the speakers (there were two), modified with a little tripold that transmitted the vibrations to the tether. 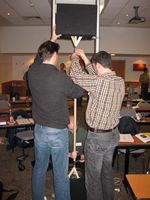 This second picture shows the overall view of the setup.  There were two poles, supported at the floor and ceiling.  The two speakers were mounted on the poles, one above the wooden tether and one below.  The tether was directly attached to the speakers so that when they “played”, the tether would vibrate.  If I understood Aage’s presentation correctly, he said that the speaker on top was controlled so that it was 180 degrees out of phase with the one on the bottom, thus creating a sawtooth wave that could be used to control the climber (if I’ve got this wrong, I’m sure I’ll be corrected and then I’ll update this post). 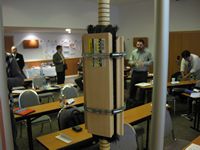 The last picture shows the ‘climber’ itself, attached to the tether.  The amount of force used to hold this climber to the tether was a very tricky adjustment.  They tried to make it work numerous times, adjusting the screws holding the climber clamps after each run.  They finally did get it to work and this is shown in the YouTube video, below: