In yesterday’s post, I wrote about the contributions and leadership provided by Ben Shelef, Andy Petro and John Kelly.  Today I’d like to thank the three people who actually made the whole space elevator raceway work.  Readers may remember the problems that previous incarnations of the raceway incurred.  Much of this was caused by the previous helicopter pilot’s inability to maintain position; i.e. keep his helicopter in the ‘safe zone’, away from the people below.  With the finding of pilot Doug Uttecht, this last hurdle was solved and the raceway became a safe, predictable, stable thing of beauty. 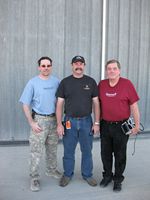 There were a trio of people involved with operating the raceway.  First, of course, was the pilot, Doug Uttecht (pictured in the center).  Doug was the guy responsible for picking up the raceway cable, keeping it on station and at correct tension and then bringing it back down when the run was completed.  This guy was amazing.  His control of his MD530FF helicopter was remarkable and brought about the best line I heard at the Games; “If this guy was any better, we almost wouldn’t need a tracking system”.  Truly he could make that helicopter dance.  During the pre-ops briefing held on the final day, Doug actually received a round of applause from everyone else there (50+ people) for the outstanding job he was doing. The guy is money…

The second part of this trio was Keith Mackey (pictured on the right).  He is an aviation safety consultant that Ben Shelef, CEO of Spaceward, found on the Internet!  His list of credentials and long experience is just amazing.  Ben thinks he might be the most credentialed pilot in the world today.  He is licensed to fly just about everything, commercial jets, private aircraft, helicopters, even blimps!  Keith was the person who came up with the GPS system which allowed the helicopter to station-keep with such amazing accuracy.  How this device works is described over at the official site of the Space Elevator Games.  Keith’s ‘job title’ at the Games was ‘helo ground control’.  He interfaced with Doug via the radio, telling him when to ascend and descend and how fast.  As Keith is a helicopter pilot too, he knew exactly what Doug needed to know and just the words to say it in.  The conversations between the two were succinct, with not a word wasted or out of place.  Between Doug and Keith, that raceway was kept a tame beast, waiting to do the competitor’s bidding…

And finally we have Tetherman (aka Michael Keating – pictured on the left).  Michael was the guy who was responsible for the safe ascent and descent of the Climbers themselves.  Before ascent, he would hold the Climber and cable (with his special ‘ring tool’), waiting for Doug to pick up the cable and bring the Climber to it’s starting position.  In descent, he would have to track the cable and Climber down and guide the Climber to a gentle landing.  This was a huge responsibility – these Climbers represent tens of thousands of dollars and tens of thousands of man-hours of work – keeping them from plummeting to the desert floor was a good thing.  Tetherman has developed a cult following and I fully expect him to arrive in a cape and special helmet for the next Games.

(Graphic of the Three Caballeros from here – and truly, if you haven’t seen this Disney classic, you’re missing a treat – the music alone is worth a view.  Click on the picture thumbnail of Michael, Doug and Keith to see a larger version of the picture)