Time to start giving thanks where thanks are due.  There were many, many people and organizations who’s help was crucial to the success of the recently completed Space Elevator Games. 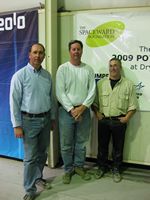 Pictured are, from left-to-right, Andy Petro, John Kelly and Ben Shelef.  Andy is from the NASA Centennial Challenges ‘office’ and he was the guy there ensuring that the Challenge was successfully and legally met and also had the happy task of handing the $900,000 check to Team LaserMotive.  Andy was the guy who had to fill the very large shoes of previous Program Manager Ken Davidian, but the shoes certainly seem to be a comfortable fit.  When Andy first took the position, I asked him to say a few words about himself for we in the Space Elevator Games “community” – his response can be found here. Finally, how many people have a “look-a-like” contest named after them?  Andy is such a lucky guy…

The guy in the center is John Kelly.  He was the NASA point man at the Dryden Flight Research Center (DFRC) and there’s only one word to describe him; awesome.  When Ben first approached Dryden about hosting the Games, it was John Kelly who grabbed this ball and ran with it.  He marshaled more and more forces at DFRC until, it seemed, that he had the entire organization working with us.  Whenever we needed something, he came through for us.  He took very large chunks of the organization process off of Spaceward’s shoulders, allowing Ben Shelef to concentrate on the few critical issues that only he could handle.  He was the middle-man who successfully interfaced the rigid structure of the NASA organization to the loose amalgamation of Spaceward and was absolutely key to making it all work.  On top of it all, he’s just great guy, with a wonderful sense of humor and a real joy to work with.  Plus, and also very important, he knew all of the good restaurants in the area.

Finally, the guy on the right is Ben Shelef, the CEO of the Spaceward Foundation.  It was Ben who dreamed up the idea of the Space Elevator Games, creatively and succesfully piggy-backing onto the NASA need for power-beaming and strong-tethers.  This competition has been Ben’s baby since Day 1.  I’ve had the pleasure to work with Ben over the past 3+ years and I know that a) he always finds a way to get something done, even when things look bleak and b) he’s persistent, persistent and persistent.  I know Ben has taken some heat because of previous Games not producing any winners, but he has kept his focus; forcing competitors to continually improve their capabilities and thus advancing the state of the art (which is what NASA wants).  He richly deserves the congratulations that he is now receiving.  Finally, I’ve had some brief chats with him about his future plans and, all I can say is ‘You ain’t seen nothin’ yet…’.

So there you have it – these three guys are the key organizers of all the efforts to have a successful Space Elevator Games and they all deserve our thanks and our gratitude.  THANKS GUYS!!

(Graphic of the Three Caballeros from here – and truly, if you haven’t seen this Disney classic, you’re missing a treat – the music alone is worth a view.  Click on the picture thumbnail of Andy, John and Ben to see a larger version of the picture)

1 thought on “The three caballeros…”