This past weekend, the second test of the new, improved Climber / Power-Beaming raceway was held.  As with the first test, everything went really well.  Here is the update from Ben Shelef, CEO of the Spaceward Foundation and organizer of the Space Elevator Games:

I wanted to update you on the results of the second test in Olympia this past weekend.

As you recall, we made several changes after the tests at Dryden – we changed the helicopter vendor, we mandated use of the GPS hover-aid, and we swapped out the winch with the Virtual Bob (R) motion-arrestor system. We tested everything for the first time with a 1000′ cable two weeks ago, and everything worked very well. 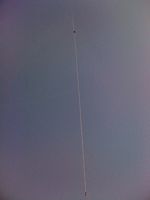 This second test was a general rehearsal for the games – we used the full length cable (total of 4300′ above ground level) and had a battery-powered climber run up to the the top while we checked that tracking was feasible within the parameters we’ve set – not exceeding a 15 degree half angle cone, and not coming too close to the helicopter.  We were able to do all of this successfully.   We also practiced pull-up and set-down of the system several times, and really, there’s nothing much to it anymore.

This is the place to give Keith Mackey his due credit, since without him this would never have come to fruition, to NW Helicopters who have been more than tremendously helpful, and to Doug Uttecht who flew the helicopter for us oh so beautifully.

I’ll be blogging about the details in the next couple of days, 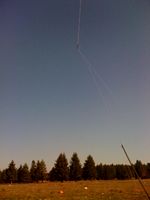 I’ve included some photos that Nic DeGrazia (from the Chicago video production company Bitter Jester Creative, Inc.) sent me.  The topmost one is unbelievably cool (IMHO) – it shows the Kansas City Space Pirates climber ascending the ribbon.  This picture is the closest thing we have yet to being able to show what a real Space Elevator is going to look like.  I don’t know if Nic composed the shot to show the sunshine spilling into the right half of the picture or not, but it’s a really cool effect.

The second picture is also of the KCSP Climber, this time not too far above the top of the Pyramid.

The third picture is of the pyramid itself while the fourth picture shows the Pyramid, too, this time with some of the base being lifted up by the helicopter.  As Nic mentioned in his email to me that accompanied this picture, “The base of The Pyramid (this was the helicopter’s anchor … you see it here doing it’s job – it plopped back down a moment later)“.  If you don’t know what I’m talking about, with the “Pyramid” and all, check out the official website of the Space Elevator Games for the details. 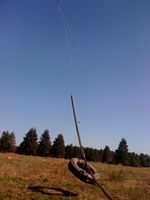 Thanks for the pictures Nic!

So, now all we need is a date for the competition.  It certainly looks like it will be sooner rather than later.  Stay tuned to this blog or the official site of the Space Elevator Games for the latest updates.

6 thoughts on “Everything is looking good…”