I received this email from Brian Turner, captain of the Kansas City Space Pirates:

We are off to Seattle to do some testing with the new helicopter and cable arrangement this weekend.

The new helicopter is about 3 to 4 times smaller and more precise than the old one. I am quite happy about that. The preliminary tests that Spaceward ran 2 weeks ago were a roaring success.

One of the downsides is that after rethinking the cable system we have had to eliminate the part where we walk up and attach the climber to the bottom of the cable while the helicopter holds it up.  That means that we have to come up with a system that lets the little, fragile climber get picked up off of the ground and set back down by the helicopter while we stand a safe distance away.

I like the safe distance part. The old system had us attaching the climber to a cable that might move up or down suddenly with enough force to take off a finger. Or if was locked in position so it can’t move up and down might snap and hit us in the head. Probably not, but this is better. However the climber gets a much more harrowing ride.  So we are going to test that and a bunch of other stuff.

As some of you may remember. At the last competition the ribbon snapped several times. One of those times was as we were walking up to attach the climber. If that had happened about 30 seconds later it could have gotten my fingers. So perhaps I am a little too focused on that particular scenario.

If these tests are successful, then a date for the competition can be set. It could be as early as a few weeks if the rest of the details fall into place. 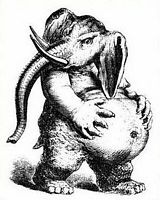 Wish us luck, and I really hope it goes well because this is starting to feel like a pregnancy that has gone well past term. Even for an elephant we are past due.

We’re getting close, really we are…