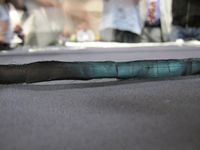 Well, the 2009 Tether Competition, one of the two Space Elevator Games, is over and it was a) very educational and b) a lot of fun.

Only 1 team competed, an entrant from Shizuoka, Japan.  They brought a carbon nanotube tether with them to a) compete against the ‘House Tether’ (the first hurdle) and, if they succeeded, to then try and beat the 5 M-Yuri mark which would make them eligible to win the NASA-donated prizes. 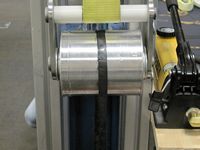 I don’t have the exact numbers of when/where their tether broke.  Ben Shelef (CEO of the Spaceward Foundation – the group that organizers the Space Elevator Games)  had developed a table of this for a 2 meter, 2 gram tether.   The Japanese brought a tether which was both longer and lighter than required.  This put them at a serious disadvantage.  When Ben calculates the exact ‘strength numbers’, I’m sure he’ll put them on the official website of the Space Elevator Games, www.spaceelevatorgames.org.

The tether the Japanese brought was very different from other tethers we’ve seen, it looked like VCR tape – other tethers (especially competition tethers) look like thin ropes.

The nanotubes in their tether were not spun together, they were held together strictly and solely by Van Der Waals force.  The reason they did this was their belief that spinning the nanotube strands ultimately weakens them.  I’m not qualified to speak to that, but time will tell if their approach is superior or not.  They are going to try and use covalent bonding forces (it’s been a long time since High School chemistry) to strengthen their nanotube product. 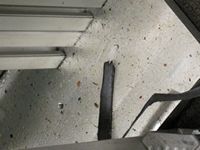 The topmost picture is a side view of the Japanese tether – as you can see, it looks like a tape from an old VCR Cassette.

The second picture is of this tether after it has been mounted on the “Torture Tether Rack”. 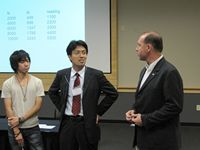 The fourth picture shows the Japanese tether after it broke -you can see the end of it laying against the bottom of the Rack.

The last picture is of the Japanese team (Yoku Inoue is in the middle) being congratulated by Andy Petro (on the right), the head of the NASA IPP (Innovative Partner Program).  Andy thanked the team for coming and gave them both NASA Pins to commemorate the event.

I’m sure the Japanese will be back next year, and this time with a year’s experience under their figurative belt – they will be much, much, better…