In less than an hour, we should see the Strong Tether competition.  As I wrote yesterday, only one team has showed up, a Japanese team from Shizuoka University.  They’re giving a presentation as I write this post.

I’ve got some pre-competition pictures which I wanted to share with you.  The first one is of Yoku Inoue (on the left) of Shizuoka University and Ben Shelef, CEO of the Spaceward Foundation, host of the Space Elevator Games.  In between them is the scale which will be used to weigh the tethers (note the Microsoft cup in the scale as an homage to our sponsors (thank you again Microsoft!).  Behind Yoku and Ben is the “Tether Torture Rack”. 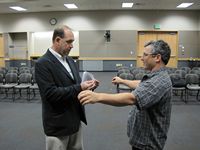 The second picture is of Andy Petro, the head of NASA’s Centennial Program (these are the people putting up the 2 million US Dollar prize money) and Ben examining the “House Tether” – this is what the carbon nanotube tether brought by the Japanese team must compete against.

The third and final picture is of the raw materials that the “House Tether” is made of.  On the left is a spool of Zylon thread while on the right is a can of 3M Super 77 adhesive.  To make this tether, Ben just wraps several strands of the Zylon around a couple of posts.  Once the tether is of the 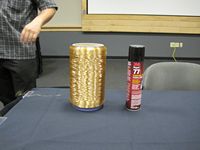 proper weight (3 grams), Ben sprays the looped strands with the adhesive. The adhesive is used to help keep the tether unraveling, but the main source of strength (outside of the strength of the material of course), is the friction holding the strands together.  The adhesive insures that the friction will happen.  When the tether begins to fail, you can hear the ‘ping’ as the individual strands making up the tether begin to separate.  Once enough of them have separated, the tether then suffers a catastrophic failure; i.e. it snaps.

I won’t be able to blog during the competition (coming up in the next half hour) – it’s just too difficult.  However, I will be Tweeting…

Log on to www.twitter.com/segames to stay up-to-date.  After the competition is offer, I will put up a blog post giving details of the results and some more photos.

(As always, click on the picture thumbnails to see a larger version of the picture)