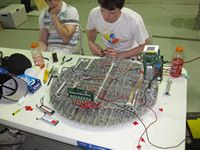 USST is now here in force – they brought a whole army with them this time – I’m going to see if I can get a group shot of them sometime (part of them are out on the lakebed right now doing laser testing). 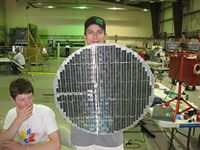 When they arrived late for the first round of testing, no one was very worried that they wouldn’t eventually be ready.  They did get a lot done in the short time they were onsite and were provisionally cleared to compete.  And, we all know that they are a force to reckoned with in these Games, having had the best performing climbers in the 3 previous Games.  They are also the only team with a successful laser climb to the top of the competition tether under their belt – and they did it multiple times in a row.

Still, its nice to see them here, all loaded for bear as the are.  I’ve included several pictures of their partially assembled climber in this post (they are putting it together as I blog). 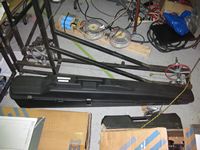 This third picture is my favorite – it’s the case they use to transport part of their climber in.  It looks suspiciously like the case I use for my Mossberg 535…

The last picture is of the treadmill that they use for some of their testing.  You can see the climbing mechanism of their climber on the right. 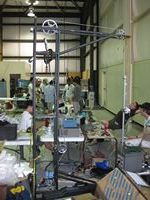 One more USST note; they’ve changed their website – the new location is now http://www.usst.usask.ca/.  Because I hadn’t noticed this, I haven’t seen their latest updates including a very good summary of their last testing go-round.  It’s really worth a read and lets you know the efforts and issues that these teams have to deal with.