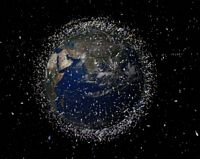 I’m sure that many/most of you have seen by now the stories about how a Russian and an America satellite collided somewhere over Siberia.  Evidently the Russian satellite (Cosmos 2251) was a ‘dead’ one while the American satellite was part of the Iridium network (Iridium satellite #33).

At some point, we, as a species, are going to have to actively go after this space debris.  It has holed the ISS on more than one occasion and presents a growing danger to satellites and astronauts.  It will also present a danger to the Space Elevator.  Right now, the mitigation strategies for a Space Elevator include shaping the Elevator tether into a curved form so that small debris would not sever the ribbon but rather poke a hole or two in it and inducing waves into the tether, timed so that the ribbon would avoid the larger debris.

I don’t like either strategy but freely admit that I don’t have a better idea.  However, as Ivan Bekey (among others) has pointed out, sooner or later, everything in orbit is going to intersect the path of the space elevator so the problem will come to us.

When we do build a space elevator, lets figure out a way to clear up the space junk, too.  It will be a public service…

This post from the Planetary Society shows the orbits of the two satellites and where they collided.  And, on a personal note, I’m bummed that an Iridium satellite was destroyed.  One of my favorite activities is watching ‘Iridium flares’, fleeting bright spots in the sky that occur when the Iridium satellite solar cells briefly reflect sunlight to where you are standing and viewing the sky.  If you haven’t seen one of these, do yourself and favor and go to the Heavens-Above website.  By entering your geographical coordinates, this incredibly cool site will tell you the time and location of all sorts of sky-stuff you can see from your geographical location.  I’ve had great fun with it and, really, seeing an Iridium flare should rank very high on your cool-o-meter.