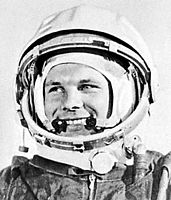 On this date, April 12th, in 1961, Soviet Cosmonaut Yury Alexseyevich Gagarin became the first human to travel in space.  Yuri’s Night celebrations are hosted around the world on this date each year to celebrate this event.  Congratulations Comrade!

Another anniversary of note on this date was the maiden flight (in 1981) of the first Space Shuttle, Columbia.

And finally, this date (in 2018) was the initial hoped-for ‘start of service’ date for the LiftPort Space Elevator.  Alas…

2 thoughts on “And today we celebrate Comrade Gagarin…”