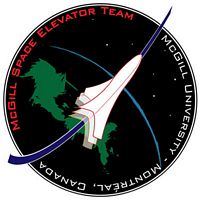 Followers of last year’s Space Elevator Games may remember that team members of the McGill Space Elevator Team narrowly averted tragedy in a car/trailer accident which they were involved in on the way to the games.  The picture and story of the crash (chronicled here) looked awful and I think it was a miracle that a) no one was hurt and b) they were actually able to get their climber together to compete.  They “double-dipped” on their power-source, wanting to go with both solar and microwave power.  During the competition, however, they ultimately went only with a microwave beam, an attempt that was unsuccessful.  They were more successful, however, in the Light Racers competition, producting the car that was, by far, the fastest one in the competition.

This year, in addition to sporting a very spiffy new logo (shown above – click on it or visit their website to see the full-size version), they are planning on competing again in the Climber/Power-Beaming event.  I emailed some questions about their plans this year to their captain, Cyrus Foster.  Here is what he had to say:

[Space Elevator Blog – SEB] – What kind of power source do you plan on using this year?
[McGill Space Elevator Team – MSET] – We plan on purchasing a Dilas laser as it will output a frequency well matched to our photovoltaic array and allow for extensive testing at McGill.

[SEB] – Will you be using essentially the same climber mechanism or are you going to go to a “Mark 2” version? If so, what kind of upgrades are you planning on doing?
[MSET] – We have designed a new climber to conform with the 2008 rules.

[SEB] – How many members – what kind of skill sets do you have on your team?
[MSET] – We have 46 members representing the departments of Electrical, Mechanical and Software from the Faculty of Engineering as well as some students from the faculties of Arts and Science.

[SEB] – What are your goals this year?
[MSET] – Our goal is to engineer an effective power beaming system and compete at the 2008 Space Elevator games.

Cyrus, thanks very much.

So this makes at least seven teams (USST, Lasermotive, the TXL Group, the Kansas City Space Pirates, the Queens Space Engineering team, the National Space Society and the McGill team) that are planning on using lasers to power their climber this year.  This is uber-cool.

1 thought on “News from the McGill Space Elevator Team”