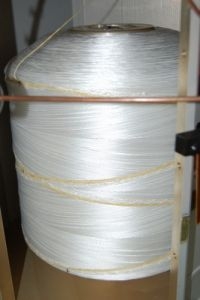 In April of this year, I posted about a couple of tether launches scheduled for later in the year.  One was from Tethers Unlimited, home of the esteemed Robert Hoyt (documented here, here, here, here and here.)

The other tether launch I mentioned was the 2nd effort from the Young Engineers Satellite group and was so labeled the YES2 mission.  The European Space Agency (ESA) described this mission as follows:

“YES2 was one of the ESA-provided payloads on board the Foton-M3 microgravity mission. The Foton spacecraft and the piggybacking YES2 payload were launched by a Soyuz rocket from Baikonur, Kazakhstan, on 14 September. The YES2 experiment was installed on top of the battery pack of the Foton-M3 capsule. The 6 kg Fotino capsule was attached to the end of a 0.5 mm thick, 31.7 km long tether. Once the tether unwound and deployment stopped smoothly at 30km, the Fotino capsule was to be automatically released by a pyrotechnic device and sent on a return path to Earth’s surface through the atmosphere and landing safely by parachute in a pre-determined location. The objective was to demonstrate the ‘SpaceMail’ concept of delivering parcels back to Earth from an orbiting spacecraft using only a tether.”

This video on YouTube gives a good explanation / animation of what the mission was supposed to do.

This YouTube video, originally from Russia today, shows the launch and discusses the mission in some detail.

Several videos of this launch and the events leading up to it are posted on the ESA website here.

In September of this year this mission was launched.  After the deployment of the YES2 satellite, problems occurred and the mission was reported to have failed.  Supposedly only part of the tether had deployed.  Several news stories covered this event:

From Kommersant, Russia’s Daily Online (this story contains the answer to the trivia question I posed in the title of this post).

Recently, however, it was reported that new data indicates that all 31.7km of the tether WAS deployed.  The YES2 satellite may have even landed but this is not yet known for sure.  It would be way cool if it did…

The blog / updates on the YES2 website are very interesting (not to mention voluminous).

Incidentally, in this Associated Press release, it was reported that the tether was “made of Dyneema, a substance that the European agency said is the world’s strongest fiber and is used by kite surfers.”  Looking this up in Wikipedia(sorry Dr. Edwards), one finds that this material is very similar to Spectra, and is made up of extremely long chains of polyethelene held together by Van der Waals bonds (suspiciously similar to the hoped for carbon-nanotube fibers to be produced in the very near future).

2 thoughts on “What do silkworm moths, mice, tritons, lizards, snails and cockroaches have in common?”