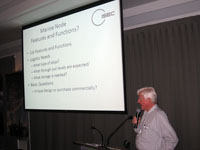 Next up was the second mini-workshop of the conference, this one targeted towards requirements, design considerations, issues & concerns, etc., with a marine-based earth port.  “Conventional wisdom” says that the earth anchor of a space elevator will be based in the ocean (for details, see Dr. Brad Edwards & Eric Westlings book).  This has several advantages, but also brings up some problems vs. a land-based earth station.

Conference attendee Vernon Hall was in overall charge of this workshop and is going to be heading up the ISEC report on Marine Node Design Concepts (the 2015 ISEC theme).  Mr. Hall has extensive experience in designing ports, including the Port of Los Angeles and should be a very valuable resource for ISEC and their goal of increasing our understanding of the Space Elevator.

Four groups were created, each of them handling a different aspect of Marine Node Design.  After a brainstorming session, each group reported back to the conference at large.  At some future point, these reports will consolidated and made available to the public.