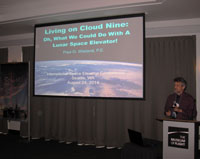 Next up was author Paul Wieland.  He talked about “sphere habitats that could be built on the moon and then “launched” to earth via a lunar elevator.  Paul said that Buckminster Fuller came up with this idea of sphere habitats (we’re talking about spheres 1,000 or 1,500 meters in diameter) and that, because they would be inhabited and that the inhabitants generate heat, this heat would cause the sphere to float.  He quickly ran through the numbers which claim that this could be true.  Frankly, I have to think about this and look at the numbers more thoroughly before I accept this as do-able, but the idea is very intriguing.

I have never heard of this idea before, but a quick Google search turned up a number of sites that discuss the concept, for example here and here.