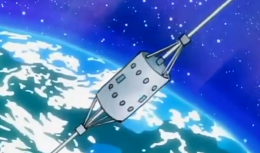 Here’s an animation that just showed up in my FeedDemon reader – 8 animals riding on a Space Elevator, part of a United Nations project:

“The Animal Conference on the Environment” multimedia project was launched in 1997 during the Conference of the Parties to the United Nations Framework Convention on Climate Change held in Kyoto, Japan. The project includes children’s picture books promoting environmental awareness, and short animation video clips.

One of these videos (episode 5 – ‘With Love from Space’) has 8 animals (each one from a different country) taking a ride on a Space Elevator up to a Space Station.  The details they specified about the Space Elevator are correct (at least according to current thinking).  The tether (they call it a cable) is reeled outward (upwards and downwards) from GEO, the Base Station has an ocean location and , when the animals fail to get off at the first space station, it will take “days” to reach the next one (i.e. they have the Climber speed at the proper scale).

The video doesn’t give credit as to actually produced it, but I suspect the Japanese as many of the sites (one here) this video has been discussed at are Japanese, the conference kicking off the project was in Japan and when you Google this video, you find many of the titles / explanations in both English and Japanese.  Anyway, I thought it was cute…

1 thought on “The Animals ride a Space Elevator”