The day after the recent Space Elevator Conference in Redmond, Washington, I needed to drive Yuri Artsutanov and his translator (Eugene Schlusser) back to the Sea-Tac airport so that they could catch their flight.  On the way, we stopped at the LaserMotive facility so that a) the LaserMotive people and Yuri could meet and b) we could see what was happening with them. 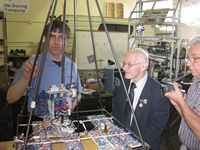 The visit was a lot of fun – Yuri, being inquisitive and generous as always.

LaserMotive is now demonstrating their beaming-power technology by remotely powering a toy helicopter for, essentially, unlimited amounts of flight time.  In late August, they demonstrated their technology at the AUVSI Unmanned Systems North America 2010 Conference in Denver, Colorado.

And, they announced on their blog a few days ago:

LaserMotive to Demonstrate Laser-Powered Helicopter at Future of Flight Aviation Center; Will Mark Longest Duration Untethered Laser Powered Helicopter Flight on Record. In partnership with Ascending Technologies, we will be flying their Pelican quadrocopter via laser power for at least 10 times (and maybe 20 times) the duration possible with batteries alone.

No updates yet on their website as to how well the demo went, but we’ll hear from them soon on this, I’m sure.

Finally, LaserMotive received the runner-up prize at the recent NWEN (Northwest Entrepreneur Network) ‘First Look’ forum earlier this month.  Congratulations to LaserMotive for this and all of their accomplishments!

(Picture thumbnails are, from top to bottom, Tom Nugent of LaserMotive showing Yuri the Climber that won the Space Elevator Games – Climber/Power Beaming competition, Yuri enjoying the $900,000 award check that LaserMotive won in the competition, the demonstration system (enclosed in a transparent case) – you can see the helicopter sitting on its ‘landing pad’, and finally Tom showing Yuri this demo system – you can see the helicopter in flight.  As always, you can click on any of these thumbnails to see a full-size version of the picture.)

2 thoughts on “What’s up with LaserMotive…”