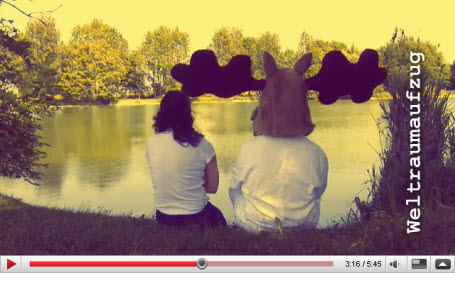 What does the above screenshot (which I absolutely LOVE) have to do with the Japan Space Elevator Games?  Bear with me…

One of the items which recently popped up into my RSS Reader was a story discussing Japan’s first Space Elevator Game competition (JSETEC).  This competition took place just a couple of weekends ago (August 8th and 9th) and I had previously posted about it (here) and included some pictures that Shuichi Ohno, President of the Japan Space Elevator Association (JSEA) had sent me.

This news story (from Japana.com – addicted to Japan!) had a video from the competition, a very interesting one which gave a climbers-eye view of the winning entrant.

When I saw this video, I immediately thought of the similar-type video that was shot from the Kansas City Space Pirates’ Climber during the 2007 Video Games.

The video of the climber from the Japan Space Elevator Games was from the winning entrant, WARRSETEAM, a team from Germany.  I think I’ve posted about this team before, but I’m not sure it’s them – when I click on the link in my previous posting to their team website I get the infamous ‘404‘ message.  Anyway, the WARRSETEAM video in this post shows them climbing 120 meters in 25 seconds, about 4.8 meters / second.  To be eligible for the $2 Million prize in the US Space Elevator Games, the climber has to travel 5 meters / second.  Yes, I know, it has to be over a full kilometer and it has to be beam powered (the Climbers in the Japanese Games were battery powered), but it’s very instructive to see what nearly 5 meters / second looks like.  The Climber is zipping right along, no doubt about it…

Anyway, if you go to YouTube and do a search on WARRSETEAM, you see that they have their own channel with 5 videos in it.  The first three show their climber in various stages of development while the other two show competition runs.

Now, to relate this back to the Moose, before I got smart and searched on WARRSETEAM, I first tried using “weltraumaufzug” (the German translation of “Space Elevator”) as my search term and turned up this gem;

This is apparently a German-language news show, which gives a quick overview of several subjects.  One of the was the Space Elevator and Space Elevator Games and they showed a) where the competition is being held this year and b) a photo of the winning USST team from the last Games.  The lead-in to the story was the picture at the beginning of the post.  Next to the moose and his girlfriend is the term “Weltraumaufzug”, which is German for “Space Elevator”.

So you see?  It all relates.  Incidentally, there are several other “Weltraumaufzug” YouTube videos, so I’ve got some more stuff to search.  And it occurs to me that I have the translation of Space Elevator in several other languages so I can do even more searches…

Finally (and totally off topic), I’m adding this japana.com blog to my RSS feeds – there is some really cool stuff on it.  They have a video of two teenage girls “popping”.  These girls can dance!