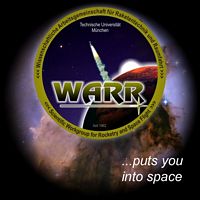 A couple of weeks ago, I alerted my readers to an episode of Quarks which was recently shown on German TV.  This show had a segment about the concept of Space Elevators and also a segment about a team of German students who were in the process of designing an entry into the Space Elevator Games.  Thanks to Markus Klettner, head of EuroSpaceward, I was put in touch with Andreas Hein, former team leader of the WARR elevator team (which, before that was known as Team Telsa and before THAT was known as Team Ramco I).

She has kindly emailed me what she says is a translation of an article about Space Elevators which appeared on the Quarks TV site.  In her email she also said: “Regarding our future plans, we will decide this issue on our next meeting end of April. We hope that we are able to answer all questions about our planning by this time.”

The article (shown immediately following) says that they are planning on having Microwave-driven climber, using an antenna which is 30 meters in diameter!

“With the elevator through the galaxy

Will we travel into space with a space elevator in the future?

The idea to build a space elevator was made popular through the science fiction novel “Fountains of Paradise” by Arthur C Clarke. In the meantime former NASA members, different scientists and amateur space enthusiasts actually work on this idea. And that’s the vision: The space elevator consists of an anchored platform in the sea, a counterweight in space and a ribbon, which connects both. Due to the rotation of the earth, the ribbon is hold tight through the centrifugal force. Along it, elevator climbers climb up. In an approximate height of 36.000km, in the geostationary orbit, a space station is erected. From there, it is possible to reach even further into space. The elevator itself is fed with energy through a gigantic laser from the ground. It transports goods and also passengers much cheaper and safer than is done till now with the Space Shuttle.

A competition for space elevators

To promote the idea of a space elevator to the public and to get as many people as possible involved, a competition was founded in 2005: the Space Elevator Games. The American space agency NASA donated the prize money. Since then, every year hobbyists and student groups from all over the world meet in New Mexico or Utah and let their mini space elevators climb up and down for the bet. The so called “climbers” have to go up along a ribbon and have to be fed only by energy from the ground – for example, through a laser or reflected sunlight. In 2007 there were 20 teams participating. In order to win the prize money of 500.000 dollars, the climbers should have climbed 100 meters within 50 seconds. However, this wasn’t accomplished by anyone yet. For the next games in autumn 2008, the conditions were even raised further: A distance of one kilometre has to be handled.

A group of German students has also set the goal to participate in this competition. 25 engineering and physics students from the Technical University of Munich have started to construct an own space elevator a year ago. For the energy transmission, they count on microwaves. Lasers were not effective enough for them. But to send the climber a kilometre high into the air, they need an emitter with a diameter of 30 meters. They are not able to finance this at the moment. If they actually participate in the competition one day depends also on possible sponsors.

Carbon atoms as the hope

The space elevator is already thought through by the planners into detail. For the many technical details, the visionaries have already found solutions. So the development of the machine which climbs along the ribbon into space should, with all the difficulties involved, only be a matter of time. The biggest problem is the proper material for the ribbon. It has to be enormously stable and insensitive against outer influences. Such a material doesn’t exist so far. Steel would be destroyed through its own weight. The hope lies on carbon atoms. It is known since a long time that they form strong connections among each others. In this way diamonds, graphite and Fullerene are formed. Ten years ago it was moreover discovered that carbon atoms also form to tiny tubes. These carbon tubes have an enormous resistance, are much more stable and lighter than steel. They even exceed the resistance of steel about a hundred times. For the planners of the space elevator, this is the optimal material for the elevator ribbon. However, these tubes only have a diameter of a millionth millimetre and a length of a thousandth millimetre. So far, there are no tools in the nano world to produce long ribbons out of them. Least of all, if these ribbons should be thousands of kilometres long. If they have the wished properties then at all is also uncertain.

From dream to reality

At the moment, nobody knows if there will ever be a space elevator. Optimists, like the former NASA advisor Brad Edwards, who has committed himself to this idea, believe that they will experience it themselves. They dream of a chain of interconnected space stations and of the conquest of the near planets. Yet everything seems unbelievable but there were other visions which made their way. The author Arthur C Clarke had an idea in his novel about the space elevator, which also many thought was incredible: communication with the help of satellites. This was in 1945.”

I hope they are successful in competing for several reasons:

Let’s hope that their planning and search for a sponsor is successful.  Incidentally, if you haven’t watched that Quarks TV show yet, treat yourself and do it.  Even if you don’t speak German, what they are doing is very clear and understandable.  The show is well put together and they use many graphics/animations which I think are new.

1 thought on “News from Germany…”