In the previous Climber / Power-Beaming competition portion of the Space Elevator Games, the ‘raceway’ tether was held aloft by a crane.  Each year this tether distance became higher, culminating in a 400 foot tether in the most recent competition. 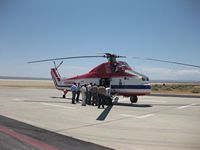 Though this solved the problem of how do you hold up such a long tether, it presented another problem – namely how does the helicopter pilot keep the aircraft in a relatively stable position?  At such a height and in such a featureless location, this caused some concern.

At the official website of the Space Elevator Games, Ben Shelef tells us how this problem was addressed.   The solution is very ingenious…