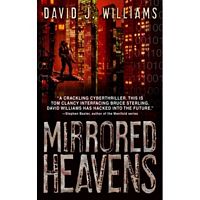 In June of last year, I blogged about a new book, The Mirrored Heavens, by newcomer David Williams.  I’ve only recently been able to begin reading the book and, while I’m not finished with it yet, I can safely say that the first section of the book is non-stop, pulse-pounding action.  Truly, it gets your motor running… 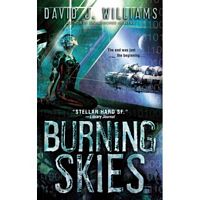 I bring this up now because David has a new book in his future histories series coming out, The Burning Skies.  From the book’s description:

“In his electrifying debut, The Mirrored Heavens, David J. Williams created a dark futuristic world grounded in the military rivalries, terror tactics, and political wrangling of our own time. Now he takes his masterful blend of military SF, espionage thriller, and dystopian cyberpunk one step further—to the edge of annihilation . . . .

Life as U.S. counterintelligence agent Claire Haskell once knew it is in tatters—her mission betrayed, her lover dead, and her memories of the past suspect. Worse, the defeat of the mysterious insurgent group known as Autumn Rain was not as complete as many believed. It is quickly becoming clear that the group’s ultimate goal is not simply to destroy the tenuous global alliances of the 22nd century—but to rule all of humanity. And they’re starting with the violent destruction of the Net and the assassination of the U.S. president. Now it’s up to Claire, with her ability to jack her brain into the systems of the enemy, to win this impossible war.

Battling ferociously across the Earth-Moon system, and navigating a complex world filled with both steadfast loyalists and ruthless traitors, Claire must be ready for the Rain’s next move. But the true enemy may already be one step ahead of her.”

A visit to David’s website is well worth your while.  The art is first rate and the trailer of the Mirrored Heavens ranks very high on my cool-o-meter.  In his first book, the mysterious enemy Autumn Rain successfully took out the Phoenix Space Elevator.  In his new book, Autumn Rain’s new target is the Europa Platform.

Buy both the books – I don’t think you’ll be sorry.  And, as soon as I’ve finished the first one, I’ll post a review of it.