This post courtesy of Stephen Steiner of Team DeltaX:

Today I participated in the closed-session Carbon Nanotube Filament Seminar intended to promote interest and awareness of carbon nanotubes as a strength material among Japanese industry.  The seminar took place at Nihon University in Tokyo in a large classroom reminiscent of a hall we often take our final exams in at MIT.  The seminar featured simultaneous translation of Japanese to English and vice versa by translators in a soundbooth in the back of the room through pocket multichannel radio receivers.  I was extremely impressed at how fluid and apparently accurate the translations were, which made for seamless conversation between presenters and audience members regardless of communication protocol.

All in all there were about 40 people present at the seminar, with representatives from various companies including Suzuki, Toray (carbon fiber manufacturer), and Toyobo (Zylon manufactuer) to name a few.  I will note that although the commercial nanotube industry is already heavily based in Japan, the companies producing nanotubes here primarily focus on applications for electronics and composites, as opposed to nanotubes for fibers or strength applications.

The first speaker was Mr. Tsuyoshi Hashimoto from Meijo Nanocarbon here in Japan.  Meijo is a producer of single-wall carbon nanotubes produced through the arc-discharge technique.  This technique does not produce long CNTs but instead short, electronics-grade CNTs.  Tsuyoshi presented a number of products his company makes, including highly solubilized CNTs in various solutions, petri dishes lined with SWNTs which supposedly enhance microorganism growth, and a bottle of glassy black strips composed of SWNTs which is apparently the SWNTs as-produced.  Tsuyoshi explained their company’s target markets, which are primarily focused on use of SWNTs as transparent conductive layers for electronics and photovoltaics and SWNTs as fillers for composites with other materials (i.e., plastics and metals).

Our second speaker was Dr. Bryan Laubscher who spoke at a high-level about nanotubes as they pertain to the space elevator.  Bryan highlighted the various technological transitions in society which have coincided with the mastery of stronger materials throughout history–the mastery of stone and the populating of every continent except Antarctica, the mastery of bronze and the establishment of city-states, the mastery of iron and the emergence of empires and seafaring civilization, the mastery of steel and the industrial revolution, the discovery of polymers and the space age, and now what he predicted will be an era of CNTs and the space elevator.  Some conversation followed the presentation pointing out the discovery of CNTs was not in fact by Iijima in 1991, who really was responsible for “rediscovering” carbon nanotubes and showing their scientific and technological potential, but rather by Endo in 1975 and perhaps as early as 1955 by a Soviet researcher and shortly thereafter in the late 1950’s by McCartney in the United States.  Bryan also mentioned that he is leading an effort that hopes to compete in the strong tether competition which we look forward to competing against! 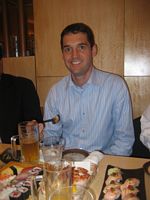 Dr. Marcello Motta from Cambridge University then presented work from Prof. Alan Windle’s group on the production of continuous CNT fibers.  The talk was absolutely excellent.  Marcello has been one of the essential players in the development of the Cambridge yarns and provided some very interesting insight into their system, which is a two-story tall vertical furnace.  Their materials are almost exclusively made of fat double-walled carbon nanotubes which collapse into flattened structures (as opposed to staying rigidly cylindrical), giving them much better surface area for contacting other nanotubes.  Their fibers (fibres) are generally in the range of 2.5 GPa reliably, and over mm-lengths somewhere in the range of 10 GPa–this represents the breaking strength of primary fibers which make up the yarn, whereas the lower number represents the slipping strength of the primary fibers.  Marcello also mentioned that Windle’s spin-off company Q-Flo has recently received funding and as a result some of the scale-up efforts could not be discussed in great detail, however the technology is finally transitioning out of the laboratory.  Marcello also showed a picture of a bicycle wheel-based apparatus with a circumference of 2 m designed for making 2-m continuous yarns and stated he intends on attending the 2008 strong tether competition (being held in Florida from Feb-Mar 2009)!  Although Marcello said their materials are not strong enough to win, they wanted to get the experience of going through the competition so that they can work towards winning!  Very exciting that we will have some CNT competition!

I then realized I forgot all of my nanotube samples back at the hotel (I blame jet lag) and Chie Saito of Earth Track Corporation was kind enough to help me navigate the Japan Rail system to go back and get them.  While we were gone everyone else enjoyed bento boxes and green tea.  Akira Tsuchida, the conference organizer, then gave Ben Shelef’s talk about the Tether Strength Competition Centennial Challenge, which I caught the very end of.  Akira did a very good job of representing the Spaceward Foundation and the audience was intrigued.

After Akira’s talk I gave mine about the status of tether development at Nanocomp and MIT.  The first half of the talk was pretty similar to what I gave by telepresentation at the Seattle conference, basically showing how Nanocomp makes their yarns and felts and showing some of the amazing properties they have, for example, having a higher conductivity-to-weight ratio than copper!  Noting that the production of yarns at Nanocomp is very similar to the production at Cambridge, it was interesting to highlight some of the differences and similarities between the two efforts.  I then went into a more academic discussion of the termination mechanisms in nanotube growth to help highlight some of the reasons why nanotubes stop growing and how we can deal with each of these issues.  I also showed some slides about efforts towards multi-centimeter carbon nanotube forests and continuous forest production at MIT and the University of Michigan from my research group, the Nano-engineered Aerospace Structures Consortium (necst.mit.edu).  I also mentioned that we intend on competing in the 2008 competition as well, although we probably won’t win either.  We will, however, demo our a continuous CNT loop which should exhibit significantly improved tensile strength over the tether we had last year.

As a side note I must say I have enjoyed meeting Marcello immensely.  We both have a persistent, fundamental curiosity for understanding why nanotubes start growing, and why they stop.  Very much an academic, Marcello is an excellent scientist and microscopist, which has given Cambridge a real edge in understanding their materials and how they form.  Marcello also expressed his admiration for Nanocomp as an American company, who “knows how to get stuff done”.

Following my talk, Brad Edwards gave his talk about materials requirements for the space elevator.  Brad pitched nanotubes for strength applications as a highly profitable prospect for Japanese firms.  Brad described some of the efforts which he has associated himself with, for example the “supergrowth” group at the University of Cincinnati which produces 18 mm tall multi-wall carbon nanotube forests.  Brad said that “we” have some new technologies and prospects for  commercialization, but did not mention who “we” is.  Brad also showed a slide titled “Toyota Space Elevator”, explaining how an investment of just $5 billion from a company like Toyota, “just 20%” of their revenue, could fund the space elevator and open up new avenues for profit and Japanese domination in the future. 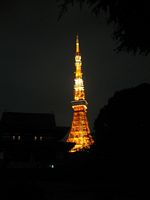 Lastly we heard from Mr. Yahio Kashiyama from Japan Manned Space Systems Corporation about experimental possibilities aboard the Kibo module of the International Space Station (ISS), including the exposure module which will be launching this year that will allow the ISS to do space-exposure studies for materials.  Yahio explained that the science aboard Kibo is already densely planned for the next 3-4 years.  He also proposed that this would be a great opportunity to study the effects of space radiation and vacuum on the longevity of CNT materials, which will be required to understand if a space elevator will survive in space.After the conference, Akira and two of his colleagues, Bryan and his wife, Brad, Marcello, and myself went to see Tokyo Tower (which is bigger than the Eiffel Tower) and then out to dinner and enjoyed a number of Japanese dishes.  We all then went back to the hotel and crashed.  (Yawn!)

More from the conference to come.