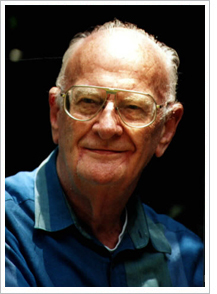 Today we received the very sad news of the passing of one of Science-Fiction’s and Science-Fact’s true giants, Sir Arthur C. Clarke.  Sir Clarke recently celebrated his 90th birthday (chronicled here and elsewhere).

He introduced millions (including this blogger) to the concept of a Space Elevator through his blending of fiction, prediction and fact in the brilliant book, The Fountains of Paradise.  He became a household name with the release of the movie 2001 – A Space Odyssey and his coverage of the Apollo moon missions along with Walter Cronkite.  He invented the idea of the Communications Satellite and had Geosynchronous orbit unofficially named after him (Clarke orbit).  His other literary accomplishments are too numerous to list and his fans are legion.

Though his body became feeble in his later years, his mind stayed alert and active.  I eagerly await the publication of his final book (‘The Last Theorem’) which he co-wrote with Frederik Pohl.

We will miss you Sir Clarke, I will miss you.  When Space Elevators become reality, I’m sure that one of them will be named after you.