I have an exclusive scoop for all of my readers…

ALIENS HAVE BEEN SPOTTED AT THE 2007 SPACE ELEVATOR GAMES !!! 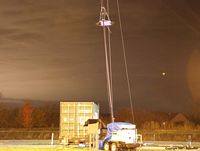 Don’t believe me?  Take a look at this thumbnail of a picture provided to me by Marc Boucher from the Space Elevator Reference.  If you click on the thumbnail you will, as always, see a full-size version of the picture.

It’s a picture of USST’s successful qualification climb.  Marc has much better low-light photography equipment than I do, so he was able to capture this picture.  You’ll note that on the right side of the picture (and illuminated by USST’s laser), you’ll see a UFO!  It’s a spy-ship from an Alien civilization.

Now, even though Marc has the better low-light camera, I’m the one who has contact with a super-secret guy who works at a super-secret sub-agency of the super-secret NSA.  These guys listen to everything, as you know.  They are even able to tap into the transmissions of these Aliens.  The aliens, as many people are aware (but our government refuses to acknowledge) have been monitering us for many decades.  But our double-extra-super-secret agency has been monitering the Alien transmissions as well, and have been able to translate them into English.

Following is the transcript (provided by my most-hidden contact who resides in an undisclosed location a safe distance away from Dick Cheney’s shotgun) of the conversation in the cabin of the spy ship plus the transmissions between them and their mother-ship (located in the L5 Lagrange point).

So that you can better understand this transcript, let me explain who the “players” are.  Skronk and Greezle (phonetic translations of their names) are the captain and co-captain of the spy ship (the one captured in the photograph).  Skippy is the commander of the mother-ship.

Skronk: Stupid humans.  They’ll never get laser power-beaming to work.  You need a government to do something like this.  It’s so funny to watch these pathetic creatures try to do this as part of a competition.

Greezle: I agree.  I mean, look at the last attempt at laser power-beaming, just a bunch of smoke…

Skronk: It took 852 plonkers (120,000 earth years) for our government to develop this technology.  I’m so happy that they control the technological development of our civilization.  If we had left it up to our private sector, it would never have happened and we wouldn’t have been to colonize this quadrant of the galaxy.  Hey, you want to hear a joke?

Skronk:  What do you call humans who are too stupid to build a Space Elevator?

Skronk:  Commander Skippy is such a hoot…

Greezle: So here goes the test – get ready to laugh…

(USST fires off its laser)

Skronk:  Greezle, did you see what I think I just saw?

Greezle:  I hate to say it, but it looks like the humans have just successfully demonstrated Power Beaming.  Zoom in your equipment for a closer look…

Skronk:  Why would a candy bar company be interested in Power-Beaming?

Greezle:  It doesn’t matter.  You know what this means, don’t you?

Skronk:  Yes I do.  We have to contact Commander Skippy immediately and let [him] know the bad news.

(Communications with the mother ship are established)

Skronk: Commander Skippy, I have the unfortunate task of informing you that the humans have just successfully demonstrated laser power-beaming.

Skippy:  Are you sure?  Do you know what this means?

Greezle:  Yes.  It means that the humans are one step closer to building a Space Elevator.

Skronk:  That would be disastrous.  If they ever developed one, well, there goes the neighborhood.

Skippy:  You’re right.  Let’s just be thankful they can’t make tethers out of carbon nanotubes.  If that happened, we’d really be in trouble…

So stay tuned – I will keep my readers posted about the latest communications from Commander Skippy, Skronk and Greezle…