I received this media advisory today from Damir Hot, the Team Captain of UBC Snowstar: 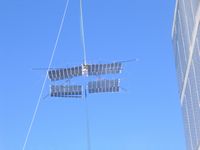 Signs will be posted to lead media from UBC Bookstore to the lab.

UBC Snowstar, a team of UBC engineering physics students, will unveil to the media the latest prototype of their solar-powered space elevator robot, set to compete in the 2007 NASA Beam Power Challenge.

Held in the Greater Salt Lake City Area, Utah, during Oct. 19-21, the NASA competition challenges entrants to design, build and race a space elevator “climber” capable of efficiently lifting a payload 400 feet (120 metres) straight up a cable using only power “beamed” from a remote source on the ground. Climbers must reach a minimum speed of 6.6 feet (two metres) per second to qualify.

UBC Snowstar has been featured in The New York Times and on CNN. They will compete with more than 20 international teams for the US $500,000 grand prize and an opportunity to revolutionize space technology. UBC is one of only two teams that have qualified to compete in all three NASA Beam Power Challenges, meeting performance benchmarks that double each year. For example, the 2006 competition required teams to lift a payload 200 feet (60 metres) at a minimum speed of 3.3 feet (one metre) per second.

“Currently, the cost of launching a space shuttle is so high partly due to the amount of fuel the shuttle carries in order to propel itself into space,” says Snowstar team captain Damir Hot. “Using solar or other beamed power sources to efficiently fuel space vehicles could be the key to eventually providing space transport at significantly lower financial and environmental costs.” 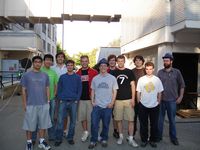 NB: UBC Snowstar will be available to display the space elevator on Thursday, Oct. 11 ONLY. Also available will be a DVD that provides footage of UBC’s solar-powered climber in action. Please contact Lorraine Chan to confirm attendance. Space is limited.

Photos of the climber are available at www.publicaffairs.ubc.ca/download/

For more information on the competition, visit http://centennialchallenges.nasa.gov/cc_challenges.htm#beampower

The press advisory carries a link to a zip file of photos (4 in all).  I’ve reproduced two of them in this email.  One is of the UBC Snowstar climber in action while the other is a team photo.  Click on them for a larger version or follow the link and download the photos.  Both of these photos are courtesy of UBC-Snowstar.