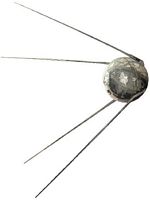 October 4, 1957.  50 years ago today.  Russia (excuse me, the Soviet Union) launched Sputnik and, with it, humanity’s first successful step into space.  From Wikipedia:

“The surprise launch of Sputnik 1, coupled with the spectacular failure of the United States’ first two Project Vanguard launch attempts, shocked the United States, which responded with a number of early satellite launches, including Explorer I, Project SCORE, and Courier 1B. The Sputnik crisis also led to the creation of the Advanced Research Projects Agency, DARPA and NASA, and to major increases in U.S. government spending on scientific research and education…Sputnik 1 was launched on October 4, 1957. The satellite was 58 cm (about 23 in) in diameter and weighed approximately 83.6 kg (about 183 lb). Each of its elliptical orbits around the Earth took about 96 minutes. Monitoring of the satellite was done by Amateur radio operators.”

It is impossible to overstate the impact this event has had on humanity.  Other writers, much more talented than I, have waxed poetic about what the launch of Sputnik meant.  Suffice it to say that without it and it’s follow on achievements (and failures), the world would be a much different place, and poorer off, than it is today.

And today, Google is displaying a modified logo to celebrate this achievement.