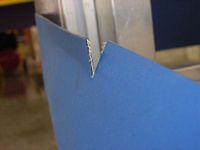 LaserMotive ran into a serious problem recently.  You can read about it on their blog.

If this had happened 3-4 months ago, it would have been long forgotten by now, I’m sure.  Happening now, however, it becomes a major issue.

I vote for Duct Tape (“If it moves when it shouldn’t, use Duct Tape – If it doesn’t move when it should, use WD-40”).  Seriously.  I think it would be perfect for this.  And, there’s precedent for it in the US Space Program.  From the Wikipedia article on Duct Tape:

“Duct tape’s versatility and holding power are evidenced by its nickname in engineering circles: “the ultimate material.” It is commonly used in situations that require a strong, flexible adhesive, particularly when exposure to the elements is a concern.

NASA engineers’ faith in duct tape as an emergency tool was rewarded in 1970, when the square carbon dioxide filters from Apollo 13‘s failed command module had to be modified to fit round receptacles in the lunar module, which was being used as a lifeboat after an explosion en route to the moon. A workaround was made using duct tape and other items on board Apollo 13, with the ground crew relaying directions to the spacecraft and its crew. The lunar module CO2 scrubbers started working again, saving the lives of the three astronauts on board.

In case of “acute psychosis” during a space mission, NASA procedures call for the use of duct tape to restrain the astronaut. [4]

Keith Canfield, who designed the scrubber modification in just two days, said later that he knew the problem was solvable when it was confirmed that duct tape was on the spacecraft: “I felt like we were home free” he said in 2005.”

03 October update – this suggestion, of course, is slightly tongue-in-cheek.  Check out the LaserMotive blog for my real suggested solution…

1 thought on “Still another use for Duct Tape?”