One of the first-time entrants in this year’s Space Elevator Games is the McGill Space Elevator Elevator team, from McGill University in Montreal, Canada.  Now I have a special affinity for that town; my wife was born and raised in the Montreal area, most of her relatives live in and around Montreal and she and I were married in Montreal.  Suffice it to say that I have spent a fair amount of time there. 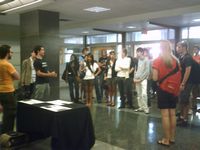 So I was pleased to receive an email yesterday from Cyrus, one of the team members of the McGill Space Elevator Team, informing me that they are in the process of updating their web site and sending me a couple of photos from their teams appearance at Discover McGill, a campuswide orientation for all first-year students at McGill. 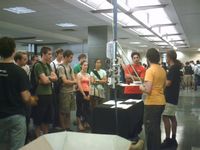 This team has been pretty quiet about what type of entry they’re going to have in this years competition and I’ll be contacting them (and all of the other teams) soon to set up some interviews.  In the meantime, enjoy the photos (click on them for a larger version).

1 thought on “News from the McGill Space Elevator Team”