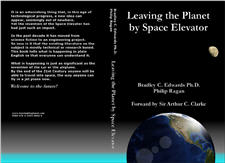 This is a long overdue review of this book.  Leaving the Planet by Space Elevator is co-authored by Dr. Bradley Edwards and Philip Ragan and is intended, according to the blurb about it on Amazon.com, to be “An easy guide to the most exciting development in space travel since the rocket. Stripped of the technical jargon, this is a layman’s guide to the breathtaking developments surrounding the space elevator: a plan to string a 100,000 km from Earth to space, revolutionizing space access.”

The book certainly succeeds in doing this.  Anyone who reads this book, assuming they have at least the intelligence of the average 8th grader and are paying attention, will be able to understand a) what a space elevator is b) how it would be constructed c) how it would work d) why it would work (i.e., the physical principles involved) and e) why it is such a great idea.

Edwards and Ragan discuss everything from the practical issues one will run into in building their version of a space elevator (for example, you need the capability to get 80 tons of parts into space, assemble them together and then lift it all to the appropriate point in geosynchronous orbit), to where it could be actually be anchored on earth.  This latter point is most interesting; the authors specify six locations where the factors of nearness to the equator, lack of storms and lack of lightning strikes favor the location of a Space Elevator earthport; the largest being on the equator and west of South America, but also including three locations in the Atlantic Ocean and two locations in the Indian Ocean.  As an aside, I found the maps of places on our planet which have/do not have storms and lightning strikes over the measured period to be fascinating.

The book also addresses a common misunderstanding; the example of whirling an object attached to a string around your hand (or head) is often used to indicate how/why the elevator cable would remain straight.  This is correct of course, but people often misinterpret this to mean that anchoring the cable to the earth is necessary in order to keep it from flying away into space; as if there are going to be some gigantic clamps holding on to the end of the cable (as the hand is holding on to the end of the string).  I still use the ‘object-on-a-string’ example, but emphasize that it is gravity, acting on the entire cable (rather than on just the endpoint) which is holding it in place; i.e. it really is a cable hanging from geosynchronous orbit.  This book makes this same point in a very easy to understand way.

This is truly a fine book and is a wonderful introduction to the potential of a Space Elevator.  Highly, highly recommended.

Leaving The Planet by Space Elevator is available from Amazon.com and Lulu.com.  For you eBook afficianados, Lulu.com also offers the book in downloadable format.

(Click on the thumbnail to see a larger version of the books front and back cover.)

Update January 24, 2007 – Well, I stand corrected.  I had written in this post that it was not really necessary to clamp the earthbound end of the tether in order to hold it to the planet – the centrifugal force pulling the tether outwards (and upwards) and the gravitational force pulling the tether downwards would be in balance.  But, as both Ben Shelef and Dr. Brad Edwards have informed me, there IS a slight, outwards (upwards) pull on the tether; otherwise when the climber was put onto the ribbon, it would have the effect of pulling the ribbon downwards.  So, to correct my earlier posting, yes, there must be a clamp holding the space elevator to earth; otherwise the tether will fly away from the planet.  But it’s not much – only about 20+ tons worth (in a system massing more than 1400 tons).  Once a 20 ton climber is placed on the ribbon, the system is then, essentially, in balance.  I apologize for my mistake…

3 thoughts on “Leaving The Planet by Space Elevator”