The Kansas City Space Pirates were the first team to attempt to qualify their Climber for the 2006 Space Elevator Games.  Unfortunately, while their climber did make it to the top and within the allotted time, it failed to descend properly and had to be hauled down.  Nevertheless, the fact that they made it to the top is quite encouraging.  I talked to their team captain, Brian Turner, and he told me that they knew what the problem was, were in the process of fixing it, would be ready to make another attempt in the morning, and still hoped to be first to qualify.  Below is a thumbnail version of a picture of their climber sitting at the top of the test tether.  Click on it to get a larger version and double-click on the arrow next to the speaker icon to hear my brief interview with him as he discusses their results. 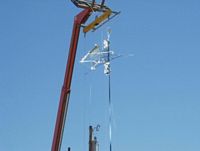 Sitting at the top of the tether…

Below are pictures taken during preparations for their attempt.  Again, click on the picture for a larger version of it and double-click on the arrow icon next to the speaker to hear a brief narration of what is going on. 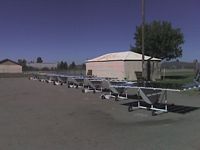 Getting ready (narration by Ken Davidian).