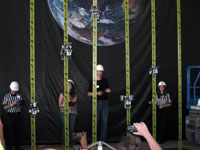 The day wrapped up with the Robotics Competition.  This is an event which ISEC has been associated with for several years and it’s always a lot of fun.  Teams enter their robotic climbers which ascend/descend a 25 foot ribbon, multiple times hopefully, and carry “payload” which they deliver to the “space station” at the top of the ribbon.  A score, taking into account climber category, speed, payload delivered, etc. is calculated and then winners are announced. 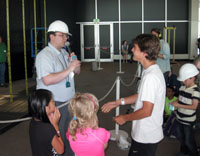 There were winners in several categories; In the “(Almost) Anything Goes” category, WASABI finished first and Atomic Robots finished second.  In the “Lego only” category, Cody Labs finished first, Geosynchronous Robots finished second and The Climbing Scorpions finished third.  Finally, Cody Labs also won the Engineering Award for Best Engineered Robot.  All of the winners received gift certificates to the Microsoft store, donated by Microsoft. (Pictured are (l) David Schilling, creator of the Robotics competition and a representative from Cody Labs, receiving congratulations and the Microsoft Gift Certificate).

The kids enjoy it, the parents enjoy it and it teaches real building and troubleshooting skills to children, hopefully stimulating their interest in engineering disciplines for their future education.

A successful Day 2 of the Conference.  Lots of interesting topics and lots of audience participation – on to day 3.