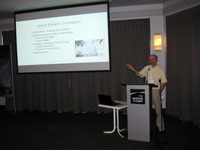 Peter Robinson gave a very interesting talk on how we might go about validating the design and simulating the operation of a Space Elevator.  He pointed out some famous engineer failures from history and all of them, of course, failed to accurately simulate their operation.  A common theme to many of these failures was that they were the first of their design – there was no other similar acting structure to use in validation and simulation.

This will obviously be a problem with a Space Elevator too – the first one will be, well, the first one.  Peter proposed how simulation, validation and testing can be built up step by step.  He also emphasized that MTBF for Climbers is very important – they will be very difficult, if not impossible, to service while on the tether.  Peter also posited that the building of a Lunar elevator will be a pre-requisite to building an earth-based space elevator.

“You won’t be allowed to build an earth-based space elevator unless you can convince an awful lot of people that the elevator will be safe.”