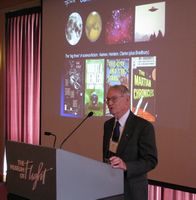 Today, Friday – August 23rd, was the first day of this year’s annual Space Elevator Conference, hosted by ISEC.  For the second year in a row, it is being held at Seattle’s Museum of Flight, a truly outstanding venue for conferences such as ours.

We had a very full first day – several presentations, including a Keynote speech by one of the co-founders of the Space Elevator, American engineer Jerome Pearson, and a Tether-Climber workshop.

The day started out with a welcoming speech from the ISEC Conferences Chair David Horn, followed by a Space Elevator System Overview given by Dr. Peter Swan.  This was followed by a short ISEC Officers report (more about this in another post).

Then Jerome Pearson gave the Keynote address – Sir Arthur Clarke and the Space Elevator.  Jerome talked about his long relationship with Sir Arthur, how they met, how they worked together on projects, including Sir Arthur’s brilliant book The Fountains of Paradise and many other related topics.  His anecdotes about their relationship and other stories from Sir Arthur’s life were truly interesting.  Anyone who is a fan of the Space Elevator and/or Sir Arthur would see this speech as a “must-view”.  I video-taped it and, when I get home and can punch up the audio to a respectable level, I’ll post it on the ISEC YouTube channel for all to see.  Mr. Pearson has a brilliant and agile mind and it was very enjoyable to get to meet him again.  He is currently doing work with NASA (his EDDE project) to help remove Space Debris – a necessary and long-overdue task.

After a short break, Dr. Martin Lades gave a remote presentation (he is in Germany where he resides) on Climber-Tether Interfaces for a Space Elevator.  I think most people, when they think about the problem at all, just assume that you can equip a Tether-Climber with some sort of pinch-roller mechanism to propel the Climber up/down the tether.  Alas, it’s not so simple – the devil is always in the details.  The profile of the tether is very small and it is believed that a carbon nanotube-based tether will have a very low friction co-efficient.  Solving this with brute-force (i.e. having the rollers pinch the ribbon very tightly) introduce their own problems.  Dr. Lades discussed the various options which might be used to solve this problem.

Mechanical Engineer Larry Bartoszek (making his first appearance at a Space Elevator Conference in 9 years) then talked about the difficulty of Getting the Mass of the First Construction Climber under 900kg (something postulated in Dr. Edwards book).  The problem appeared difficult, if not impossible to solve 9 years ago, and little has changed today.  If a way is not found to solve this problem, then it may not be possible to have a series of construction Climbers “build up” the tether as originally envisioned – another solution will need to be found.  As with Dr. Lades presentation, Mr. Bartoszek showed us that the devil is in the details…

After lunch, Dr. Bryan Laubscher gave a presentation on various methods that might be used in Powering Space Elevator Climbers and the status / likelihood of each.  This was followed by Dr. John Knapman’s presentation on the First 40kms Danger and Approach.  Both presentations gave the audience an opportunity to further their understanding of how a Space Elevator might actually be constructed and operated.

Following these presentations and a break, the first workshop of the Conference then took place, this on Tether Climbers.  I gave a short intro and description of a possible “hybrid” climber (using a combination of conventional, laser and solar power) and this was followed by Dr. Knapman presenting the possibility of thinking of how to power climbers in terms of “Constant Power” rather than “Constant Speed” and the tradeoffs that would result.  Both of these brief presentations were to get the audience in the mind of thinking about alternatives when it comes to imagining how the Climbers would work.  The audience then broke up into 5 brainstorming groups where these ideas and others were discussed.  Each group then made a brief presentation about their deliberations and some very interesting ideas were proposed.  Dr. Peter Swan and Skip Penny are going to summarize these and post them on the ISEC website within 60 days.  Of course I’ll have a post here on the blog about it.

The day wound up with an Evening Mixer at the Museum of Flight’s Red Barn Gallery.

It was a wonderful first day and everyone who attended thoroughly enjoyed it – more tomorrow!