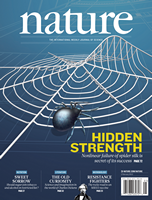 In the February 2, 2012 issue of Nature, there is an article entitled “Nonlinear material behaviour of spider silk yields robust webs”.  This article is, unfortunately, paywalled, but you can probably find a copy of the magazine at your local bookstore.  The Editor’s Summary of the article is as follows:

Spider silk is one of nature’s ‘super-materials’. Its remarkable mechanical properties include high extensibility and strength comparable to that of steel. But Markus Buehler and colleagues show that it is not just these virtues that make silk ideal for web construction. Silk’s nonlinear stress response — linear at low strain, suddenly softening as strain increases then stiffening prior to failure — is also critical. This behaviour allows webs to keep their shape when experiencing small, distributed loads such as those exerted by wind. But during strong local deformations, such as those caused by falling debris, the geometrical arrangement of the threads and the nonlinear stress response combine to limit damage to the area near the impact site, so that the web remains functional.

What does this have to do with Space Elevators?  Well, a lot actually… We all know that the tether must have a minimum specific strength in order to fulfill its function as railway line.  But it is also going to have to absorb various stresses and debris hits, etc. and not catastrophically fail.  The design of the tether will have to incorporate knowledge such as this to make it more robust.  Maybe the eventual Space Elevator tether will look like a Hoytether.

This article was written by a team of authors, one of them being Prof. Nicola Pugno of Italy.  If that name sounds familiar to longtime readers of this blog, it should, as Prof. Pugno has presented at several EuroSpaceward conferences, was awarded an Honorable Mention in the 2011 Artsutanov prize competition held by ISEC and is also an author of a peer-reviewed paper in ISEC’s Journal, CLIMB.

Prof. Pugno’s article in CLIMB, Modeling the Self-Healing of Biological or Bio-Inspired Nanomaterials, points to yet another possible tool/technique that can be used to make the eventual Space Elevator Tether more robust – the potential of ‘self-healing’ tethers, at least at the nano scale.

One of the biggest objections that the uninformed give to a Space Elevator is “What if it breaks”?  We can design in so many ways to handle this; Make the raw tether’s specific strength more than it needs to be, keep it out of the way of large debris objects by actively inducing oscillations as necessary, design it so that micro-debris hits don’t cause it to catastrophically fail, monitor these debris hits so that weakened portions of the tether are replaced before they fail, have the material be able to ‘heal itself’, at least at the nano-scale, and probably some others I’m not thinking of at the moment.

A very interesting article and well worth finding the magazine for…