Mark Boots, one of the captains of the USST team, sent out this wrap-up of their team’s performance at the just-completed Space Elevator Games:

The X-15 rocket plane is one of the most famous test aircraft ever flown at the Dryden Flight Research Center. Flying higher and faster than anything before, it explored boundaries that made possible the design of winged spacecraft like the Shuttle. The project manager and chief test pilot once said: “The purpose of test is to separate the imagined problems from the real, and to seek out the unimagined or unexpected problems.”

That statement sums up this past week for the U of S Space Design Team. We left Saskatoon with a world-class design, and our strongest effort to be prepared. From the time we arrived, we faced a set of unexpected problems that we’d never seen in our testing at home. Despite an all-out problem-solving effort by everyone on the team, we didn’t get past all of those problems in time. The final results: Our congratulations go to LaserMotive, a corporate team that succeeded in beating the 2m/s prize criteria and winning $900,000. Neither us nor the Kansas City Space Pirates (Yarr….) were able to make it all the way to the top, and no one took the 5m/s prize.

“What happened?” is the big question that everyone is asking. There were two major problems that we faced: During testing the day of the competition dry-runs, we broke the shaft connecting our main drive motor. Our backup motor had unexpected problems with its controller, and Shea spent an epically stressful day and night trying to get that motor running, while Matt and the mechanical team worked with the machinists in the NASA Dryden fabrication shop to repair the shaft on the original motor. (These guys were awesome, and we owe them huge thanks.) Unfortunately the motor problems caused us to miss the first two of our three 45-minute competition windows. 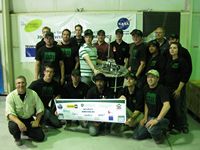 The other critical issue was with our GPS-based tracking system: We had tested it as much as we could in Saskatoon on cranes, and even chased motorbikes at 1km. This week, we watched it track our climber flawlessly as the helicopter pulled it up from the ground to the starting position at 100m. However, every time we reached the starting position, a strange source of interference hit the receiver on the climber and caused it to continuously lose its lock on the GPS satellites. We had never seen this before in all of our testing, and we’re still mystified by what could have been causing this. We put our manual tracking system into use, and although Ariq did an amazing job at the controls, we didn’t have enough time in our final 45-minute competition window to perfect the switch-over between manual and GPS tracking, or adjust the climber programming to let it be more tolerant of losing the beam.

We’re all hugely disappointed, especially because we know how close we came. The fact that no team took the 1st place prize reminds us that this is a really difficult challenge, and when you’re pushing the boundaries of what’s technologically possible, things can go wrong.

We really want to thank all of our families, wives, girlfriends and boyfriends, and everyone from the University that has supported us so much, sacrificed for us, and enabled this crazy opportunity. We’re really sorry we couldn’t bring back the prize, and we tried so hard to represent Saskatchewan as world-leading innovators and respectful professionals.

To our list of thank-you’s, we need to add a special shout-out to the machine shop staff: both Keith and the guys in the UofS Engineering Shops, and the NASA Dryden people, for the outstanding work they did for us. We’re also hugely grateful to the Dryden team: John Kelly (for running the show, kindness, and wisdom), Mike Kapitzke (for running very smooth, tight operations and keeping everyone safe), Elizabeth (for getting us where we needed to go, and being our cheerleader, even at 5 in the morning — you’re awesome!), Freddy (the coolest van driver ever), and John Piatt (who handled the challenge of laser safety on the lakebed in a keenly responsible, always critical, yet flexible and understanding way.)

Last but first, we thank all of our donors and sponsors; the critical link that made this opportunity possible. We especially want to thank the TRUMPF team: Dave Marcotte for having the business guts and the “more power — let’s do it!” race-car driver attitude to make this project possible, and the one-and-only Ivan, who kept an 8kW laser system running in the middle of the desert, without a single issue! We’re sorry we couldn’t do the same on our end.

Another huge shout-out goes to the helicopter team that supported the vertical cable: “Foxtrot” (Doug, the excellent heli pilot — If he was any better, we almost wouldn’t even need a tracking system!), “HeloGround” Keith Mackey (for keeping Foxtrot on target despite our very confusing directions, and his helpful advice), and “Tetherman” Michael Keating (for his hustle and tireless dedication to running around the desert floor catching climbers all day). We should also probably thank Ben Shelef, the competition organizer and head of the Spaceward Foundation (even if you did make us pay for the whole thing ; ) We recognize how hard it is to single-handedly organize all of this, and seriously: nice work.

Even in this huge disappointment, we’re really proud of our team. Ben refers to us as the “many-headed hydra”, and we take this as a huge compliment. It recognizes that everyone on the team had a crucial part — everyone individually has something that they are the best at. Every day we saw new problems, and every night someone came up with a creative solution. Unfortunately, we just never got to the end of all those problems in time.

It’s hard to imagine the level of dedication that causes someone to stay up for three nights in a row, and still be coming up with solutions on the last one, until they fall asleep standing up during a NASA tour on the last day. (John M., you’re a hero.) This level of dedication is there for everyone on the team, and we really gave it our all. After doing this for a year and a half, it’s so disappointing to end up here.

We are looking for the positives. This was a learning experience for everyone that surpassed anything in our official curriculum — both technically, and in what we learned about leadership, teamwork, and project planning. We, as undergraduate students and recent graduates, developed technologies and a core design that were (and still are) superior to anything in the world. This is shown from the reactions of people such as Lawrence Davis, head of NASA Test Pilot School; NASA personnel; and even our competitors. On the way back, we had a chance to tour the SpaceX facility in Los Angeles, where they are designing and assembling the Falcon 9 spacecraft which will replace the Shuttle for trips to the International Space Station in 2011. It was reassuring that we could pick out similarities in almost all aspects of their work and what we have done on this project. Some of the team members are already talking about what’s next: there’s still a $1.1 million prize out there for 5m/s, and we have a design that’s easily capable of achieving that — we just need to get it all working at once. It is great to see that the team is not discouraged by the outcome, but sees it more as a challenge and lesson to move on and and keep going.

From here on, it’s about talking about lessons learned, catching up on schoolwork, deciding what comes next, and figuring out other ways on how we can give back to the University community, even if we don’t have that $2 million prize money.

All of us were surprised, frankly, that USST didn’t run more successfully.  In every previous competition, they have had the best performance.  But no one who knows anything about this team doubts their ability and their desire to win. I’m very sure there will be another competition next year (after all, there is still more than a million US Dollars in the prize pool waiting to be claimed) and USST will be back, even more determined to show that they are a force to be reckoned with…

Finally, if you were listening to the uStream.tv broadcast (and you should have been) on Friday during the USST run, team member Nathan Windle was providing commentary about their team efforts.  Thanks again Nathan – you did a great job!

1 thought on “Post-competition analysis from USST”