I received this long and detailed email from Brian Turner, captain of the Kansas City Space Pirates.  It does a better job than I could have of summarizing the testing results from last week.  Both of the pictures in this post were also provided by Brian.

The last week of testing was quite the ride. We are currently the only team to pass all of the pre-competition qualifying tests. We passed both safety and performance tests. It is eerily similar to the last competition where we were the clear leaders early and fell short at the last minute. We must be extra careful not to lose our focus.

We were the only team to show up on Monday. Most of the rest of the teams trickled in over the next few days. There was no required arrival time because the first day was just for planning and unpack.  Tuesday was for helicopter testing. But due to a rain scare, that was pushed back to Wed. Apparently rain on a dry lake bed is a bad thing and can trap vehicles in mud that takes days to dry.

We spent a lot of time waiting. Because Edwards is an airforce base and Nasa Dryden Flight research center works on top secret stuff we had to have an escort everywhere we went once we entered the flight- line complex. This included if we wanted to get something to eat at the employee food court just a few blocks from the hanger that was Spaceward’s base of operations. Because everyone was heading in a hundred directions there was a shortage of escorts. We also had to get badges and passes, and watch safety videos. We did get to meet some really nice people as they were escorting us. Freddy and Elizabeth were great fun and very helpful. I can’t remember the other escort’s names as we were pretty busy when they were on escort duty out on the lakebed. The escorts all have regular duties. For example Elizabeth is a lawyer in the tech. transfer office.

We also learned about FOD (foreign object debris) This is basically rocks in the tire treads or kicked up into the gaps on the vehicles while they are out driving on the lakebed. This FOD can damage jet engines and create flying object safety hazards if allowed to track up onto the concrete flight-line area. Edwards is home to aircraft costing in the billions with a B. So they treat the flight-line as something like the houses where you take of your shoes off before walking on the carpet. So we have to get out and pick all of the rocks out out of the tires whenever we come in off of the lake bed.

All of this overhead took about a day of the total time we were out there. While I was waiting around I was analyzing (That’s what I do with every spare moment of my life.) all of this overhead and decided that none of it was unreasonable. If Spaceward had chosen a different place we could have avoided most but not all of this kind of overhead.  However the safety requirements for an 8 Kilowatt laser turned loose are difficult to satisfy at any venue. And the added requirements for a helicopter with a 1.3 km long cable hanging from it are also a pretty tall bar.

Safety procedures and meetings took most of another day worth of time.  I was expecting this overhead so was not that bothered by it. And perhaps a day or so waiting on Spaceward and the other teams. That left us with about 2 days that we spent working on our stuff. And that was time well spent, making up for all of the time spent waiting for everything else and the 4.5 days of total driving from Kansas City to Dryden and back.

We rented an RV in Vegas that was immensely helpful on the lakebed, in the campground and finally as the kitchen.

The Muroc dry lake bed is a thing to behold. Miles of flat dried mud with no people and almost no animals. It is the kind of place where you go to test dangerous stuff. It is also so stereotypically desert that many films and TV shows are done here. I believe that the Mythbusters episode where they were shooting bullets straight up is an example. I should also mention that it is dusty, windy and hot. There is clearly more dust than sand and it gets everywhere. Challenging all of our dust control measures and coating all of our optics with a fine layer that has to be cleaned every time before we fire the laser through our system.

The heat is not bad in the morning or on cloudy days. But Thurs. and Fri. were brutal past midday. You almost lost a hand to having to hold a water bottle all the time.

As you may have heard by now, on Wednesday the cable broke while the helicopter was lifting it up into position. This was caused by the pulley on the bottom failing from the combination of high speed and high load. Either one of which would probably have been fine by itself. After the cable broke there was some confusion as to what the procedures were. That shut down operations for the day. We went to a debrief meeting that I had low expectations of. Quite the opposite happened. All of the background players were there and the Spaceward operation was reviewed for both procedural and systemic issues. A plan for making the plan was forewarded and all the concerned parties explained their point of view in a professional manner. I learned about issues that I did not know about and all of the concerns that I thought were being ignored were clearly spoken. It was something of a how-to lesson for me on complex operations.

During the time before the cable broke we actually learned a fair amount. The cable was well behaved. A dramatic change from the past 2 competitions where the flat ribbon we were climbing became an ill- behaved and fierce enemy to success. The winds were in my estimation higher than in the previous competitions. This also means that we may have overbuilt portions of our optics system. Better overbuilt than underbuilt.

We did not get to run our climber on the cable. That was to be the next step. So we will have to move forward without the benefit of the data that would have been gathered had we gotten to do this test.

Now on to the laser testing. 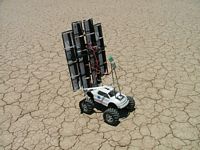 The surprise that we had planned for the testing was the RC truck. We have our climber solar panel mounted on it and it powers the thing. We had what is probably the world’s first laser powered truck. It worked well until we lost the telemetry signal and had to move on so that we could get in our stress test before the next team needed to take a turn with the laser.I am told that the video from this was awesome and I can’t wait to get my hands on it. I hope to have a version edited and posted to youtube for you guys to see soon.

Many of the laser tests were just confirming that we did what the rule book said. All of the back and forth about this stuff over the last 2 or so years came down to a procedure that was as workable as I could ask for. The most feared test for me was the climber and optics stress test. We had to exceed the duration and power level that we wanted to use in the competition to make sure that we did not have any failures that could pose a safety problem. Of course our system was designed to be cutting edge and I can’t say that I have a good feel for where that edge falls off at. If we were going to fail a test this would be the one. The test went so well that I stopped it at the maximum desirable time as opposed to the point where the temps were hitting the safety limits. The big trouble that we had last time we were in front of the laser also seemed to be cured by the custom lens from our newest sponsor Asphericon.

As for our competitors:

Lasermotive is looking excellent. They are clearly operating even better than at the last competition and have reaffirmed their position in my estimate as being one of the top three. USST got delayed at customs and was only able to get 2 hours on the laser the last day of testing. From what I saw they are operating at a level consistent with previous years but I did not really see enough to be swayed one way or the other in thinking that they round out the top three with Lasermotive and us.

I did not see or hear anything from McGill or Alberta. It seems unlikely that they have full systems hiding somewhere so I have to be pessimistic that they will arrive in competitive form in 3 weeks.

NSS and M-climber came to laser testing with systems that failed to pass the required tests. There was however limited time for them to do so. I still think that they have more than 3 weeks work to do in the next three weeks.

Our testing this week grew a long list of items that need attention, so we will be very busy putting the finishing touches on our system over the next three weeks.

This is the longest newsletter I have ever written. But then this was clearly one of the most exciting weeks in KC Space Pirates history.

Thanks Brian.  We have many more pictures and videos from the Testing that we will be posting here or at the official site of the 2009 Space Elevator Games.  Stay tuned!