In the 4th installment of this series, Ed Gray, the head of ISEC’s Business Pillar, tells why he thinks everyone who wants to see a Space Elevator built should join ISEC:

ISEC is the team that will be known in the future for catalyzing the scientific, outreach, legal and business work that give the Space Elevator to the world.  If it seems like Sci-Fi or magic, just think of the iPhone, social networking, remote surgery and other mainstays of our lives – a few decades ago.  All would have been considered magic, but they emerged through, creative thinking, experimentation, debate, audacity and through the teamwork of experts from many disciplines and from many parts of the world.

My first Space Elevator Conference in Seattle was life-changing.  If you go, you might see a theoretical mathematician from Armenia, a finance entrepreneur from Texas, a carbon nanotube scientist from Seattle or a playwright from San Diego.  You may also be like me – a new contributor to the work being done to design, plan and implement the Space Elevator.  The people and proceedings of the conference make it tough to resist getting involved.  The experts and enthusiasts of ISEC will be the steam that keeps this train moving – straight up…

Thank you Ed.  The Business Pillar of ISEC, as noted on the ISEC website, is charged with:

Space today is dominated by government business. But shipping and air travel isn’t. The Space Elevator may be built for security reasons or “national pride”, but its capacity can only be satisfied by a real space-based economy. The business pillar examines the economics of the Space Elevator.

Another focus of the business pillar are the stepping stones that lead from here to there – the ability to advance component Space Elevator technologies by building self-contained business cases around them even before the Space Elevator exists. Carbon Nanotubes are the obvious example, but not the only one.

As a specific objective, it is also important to analyze the connection and synergy between the Space Elevator and Space Based Solar Power. It may very well turn out that you can’t have one without the other. 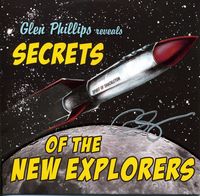 One other ISEC-related note; One of the benefits of joining as a “Standard” member is receiving an autographed copy of Glen Phillips CD, Secrets of the New Explorers.  This CD has, IMHO, the best Space Elevator song written so far – and the rest of the album is pretty cool too.  I reviewed this CD back in February of last year.  We received the first batch of autographed CDs from Glen today and they will be going out in the mail soon to those who have signed up.  For the rest of you who haven’t, I urge you to join ISEC today.  Momentum is building and you can be a part of it and help make a Space Elevator happen – JOIN!