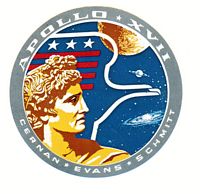 On December 14th, 1972, at 5:55pm Eastern Standard Time, Challenger lifted off the moon to rendezvous with the craft that would take mankind’s last moon walkers home.

Yes, it’s been 36 years since any human has been to the moon (or gone anywhere outside of LEO, for that matter).  Apollo 17 marked the apogee of our manned space exploration efforts and we just have to hope that it won’t mark the end of them.  Yes, yes, I know about NASA’s plans to return to the moon and to travel to Mars, but one just has to hope that the intense political lobbying and infighting going on about and within NASA won’t (again) cripple such efforts…

And, lets just say that a NASA web site showing ‘full resolution photos’ of the new moon visit is just going to give the conspiracy theorists new fodder in their claim that the original moon landings were hoaxes 🙂