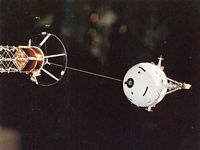 While browsing through Amazon today, I came upon a new book (not yet released), Space Elevators and Space Tethers.  I am not familiar with the author, Michel Van Pelt, but I have emailed him to see if I can get any additional information I can give to my readers before the expected release date (March, 2009) of this book.

From the book’s Amazon page:

“This detailed account of the possibilities of tethers in space, from very practical applications to (near) science fiction, gives an overview of the past, present and future of space tether development and presents the various concepts, ranging from those feasible in the near future to extremely innovative and challenging ideas. It shows how space tethers have already been used to stabilize spacecraft using tidal forces and to generate artificial gravity using a spinning system with a spacecraft connected to a counterweight via a cable. Tethers can also generate electricity by dragging spacecraft through the Earth’s magnetosphere, as was attempted with partial success during two Space Shuttle missions. Using electrodynamic forces, conductive tethers can also accelerate or brake a spacecraft.

Probably the most exciting tether concept is the space elevator, consisting of an incredibly strong long cable that stretches from the Earth’s surface into space. Solar powered “climber” machines, which are already under development, could use such a cable to haul cargo into orbit. The author also describes how space tethers can change the orbit of satellites, by effectively moving their center of gravity through the deployment of long cables. Tethers rotating at high speed can be used to accelerate or slow down spacecraft that briefly latch to them. In principle, such “momentum exchange” tethers can be used to fly a space probe from low Earth orbit all the way into orbit around Mars, without the need for rocket propulsion. A tether can also provide scientific information on the magnetosphere of the planet it’s orbiting.

Michel van Pelt explains the principle of space tethers: what they are and how they can be used in space. He introduces non-technical space enthusiasts to the various possibilities of space tethers, the technological challenges, the potential benefits and their feasibility. He illustrates how, because of their inherent simplicity, space tethers have the potential to make space travel much cheaper, while ongoing advances in tether material technology may make even seemingly far-fetched ideas a reality in the not too distant future.”

It sounds very interesting and I look forward to hearing from Mr. Van Pelt and to the book’s release.  If I receive any additional pre-release information, I’ll be sure and let you all know.

4 thoughts on “New Space Elevator book on the way”