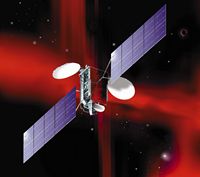 A few days ago, I was interviewed by Jon Udell, he of the Perspectives podcast fame.  The subject was, of course, the Space Elevator.

One of the questions he asked me was “Who would be the potential customers for a Space Elevator?”  This is a common question, of course, and I gave him the “stock” answer; satellite companies, governments (for satellite launches), tourists and other exotic applications, presently unknown.

I bring this up because The Washington Post recently had an article about how many satellite companies were now in, essentially, a “Mark II” phase – they have been through the ringer with previous investments (some of which had worked out and others which had not) and, with this increased experience under their belt, were looking to increase their investments in the satellite arena.

These are companies / Investors who are willing to place these bets at thousands of dollars per pound of payload.  What will these people do when the payload cost drops by an order of magnitude (or more)?  There will be no shortage of customers as I think we’re just scratching the surface…

(Picture from here; I’ll let people know when the interview with me is posted)