Today was the last full day of this year’s ISDC conference and also a day which saw the two sessions devoted to the idea of a Space Elevator. 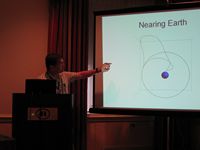 The first session today was presented by independent researcher Jim Dempsey and was entitled Space Elevator Initial Deployment.  Jim is not convinced that the tether deploymen proposed by Brad Edwards (i.e., placing an initial ribbon carrying a climber at Geo and then spooling the ribbon down to earth) will work, mainly due to ribbon fluctuations.  He’s proposed an alternative, deploying many tether fibers individually down to earth and then, when a sufficient number of them are in place, sending a climber up the ‘bundle’, combining them into a tether as it goes.  He has an Internet-reachable presentation which I’m unable to find at the moment – I”ll link to it when I can find it. 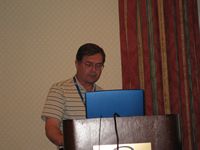 Incidentally, I’ve mentioned Jim in a couple of previous posts (here, where he related a very prescient observation from Sir Isaac Newton, and here, where he weighs in on the paper by Nicolas Pugno) and he will be presenting at this year’s Space Elevator Conference.

Next up was a joint presentation by Ben Shelef of the Spaceward Foundation and Bert Murray of the National Space Society (NSS) Space Elevator Team.  Ben went first and gave an overview of the Space Elevator Games, discussing how/why they were founded, their history and their current status. 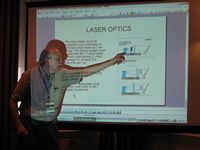 Bert then took the stage and gave an interesting presentation of what the NSS team is planning to do.  The prize money for theClimber/Power-Beaming competition is being awarded in two different levels; $900,000 for a single winner with valid climb of 2m/s and $2,000,000 for a single winner with a valid climb of 5m/s.  The NSS team is going for the whole $2,000,000. 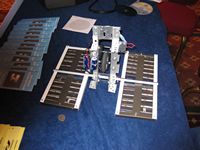 Finally, we have a photo of the “concept” climber built by the NSS Space Elevator team.  It is the one they used in the BBC documentary I blogged about here.  It is a small unit (for reference, I placed a quarter on the table just in front of it), but appears very rugged and efficient.  And, obviously it worked…