It’s now the second day of the ISDC2008 conference.  As I blogged yesterday, Stephen Steiner of team DeltaX was at the conference and at the Spaceward exhibit; demonstrating and talking about carbon nanotubes.

Today, we have the team captains from three of the Climber / Power-Beaming teams in attendance, Bert Murray (of the NSS team), David Nemir (of the TXL Group team) and Brian Turner (of the Kansas City Space Pirates).  I’ve taken several photos and shot a few videos.  I’m posting some now and more later. 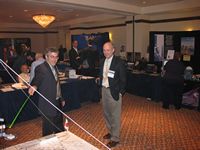 Here is a picture of Ben Shelef of the Spaceward Foundation and David Nemir, captain of the TXL Group team.  Ben is the guy with pointer.

David tells me that there will be some ‘very interesting’ news about their Climber system that they will be releasing soon. 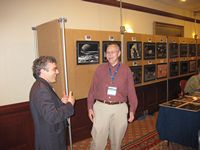 This is a picture of Ben with Bert Murray, team captain for the National Space Society (NSS) team.

Bert’s team also has an booth in the Exhibition Hall and he will be giving a presentation at the conference tomorrow. 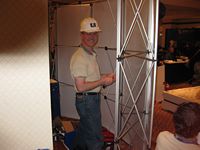 And here is a picture of Brian Turner, captain of the Kansas City Space Pirates, and recent guest on the Conan O’Brien show…

Why is Brian always in a hard hat and always trying to fix a problem? 🙂 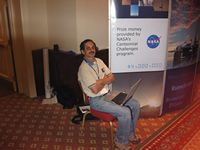 Also in attendance from the Kansas City Space Pirates was Ravi.  He’s a main character in the “Fix the Balloon” video which I’ll be posting later. 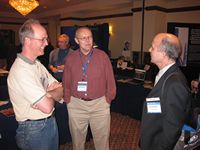 This is a picture of the three team captains.  I’m not sure what they’re discussing, but I’m sure it’s being done without revealing a lot of information… 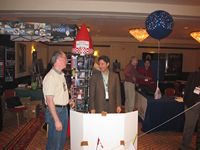 Finally, an old friend, Ken Davidian, the previous Centennial Challenges guy from NASA, is here.  This photo show him talking with Brian Turner.