Well, here I am at ISDC2008.  Lots of people, lots of cool space things and a mockup of a possible Space Elevator competition site! 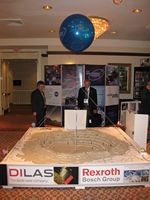 This first picture is of Ben Shelef, fearless leader of the Spaceward Foundation, along with an interested visitor to the Spaceward Exhibition (Ben is the good-looking guy on the left).  The exhibit is a mockup of what it might look like at the 2008 Space Elevator Games IF Meteor Crater in Arizona is chosen as the venue.  While the crater is to scale, of course the Lego climber on the “tether” and the balloon are not – the balloon should be about the size of a golf ball.  And this exhibit, of course, is the answer to the “Under construction” riddle I’ve posted over the past several days.  Ben will have a more extensive posting of his “progress pictures” on the Spaceward website in the next several days. 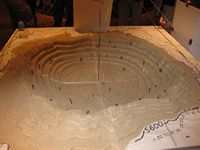 This picture is a closeup of the “crater”.  The ‘sand effect’ was created with, oddly enough, real sand. 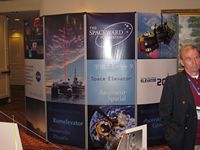 Here is a picture of the background Spaceward Display.  You can see several translations of the term “Space Elevator” on the display.  It’s nice to know that someone is getting some use out of my Translation Project…. 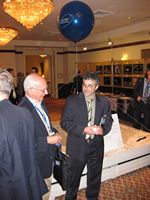 And finally, we have a closeup of Ben – this to show a certain family member that he really can wear a suit, even though it goes against everything an Engineer stands for.

The exhibit/display/mockup is really quite awesome – Ben did a great job on this and it has generated a lot of interest.  Lots of people were attracted to it and this, of course, helps get the word out.